Student loan debt has increased substantially over the last two decades, as has the number of households deferring their student loan payments, according to Piling Ever Higher: The Continued Growth of Student Loans, a new research brief released today.

Figure 1: Student Loan Debt Has Increased Substantially Over the Past Two Decades 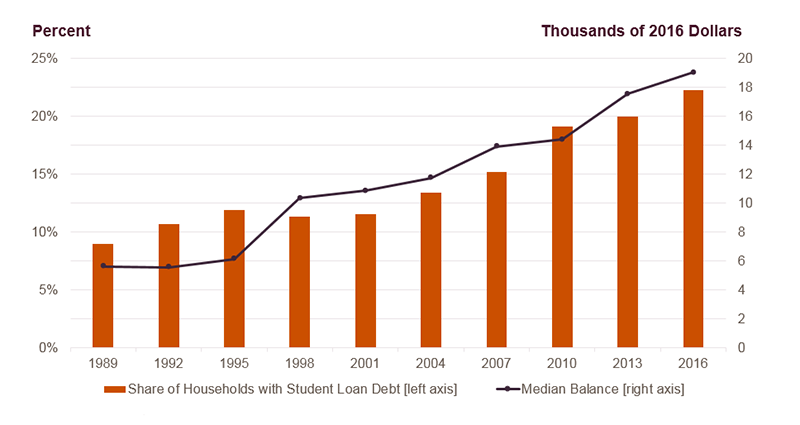 Notes: Dollar values have been adjusted for inflation using the CPI-U for All Items. Households without student loan debt are excluded from the median debt calculation. 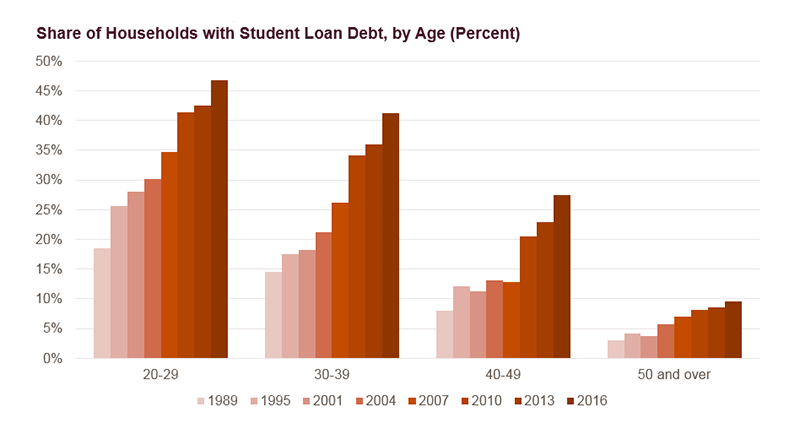 Note: Age is for head of household. Source: JCHS tabulations of Federal Reserve Board, Surveys of Consumer Finances.

The amount of debt is also striking. Over 40 percent of borrowers had balances higher than $25,000 in 2016, and more than 20 percent owed more than $50,000 (in real 2016 dollars). Borrowers with graduate or professional degrees were more likely to have over $25,000 in student loan debt than those with bachelor’s or associate’s degrees, but these households were also more likely to have higher incomes and more wealth. Perhaps more worrying is that 20 percent of borrowers owing more than $25,000, and in repayment on their student loans, did not have a college degree in 2016.

Figure 3: Over Half of Young Renters with Student Loans Are Not in Repayment

Notes: Data shown are for 20-39 year old renter households, excluding households without student loans. Age is for head of household.

While the brief does not delve into the causes of this substantial growth in student loans, research in the 2019 Poverty and Inequality Report pointed to growing tuitions, increased attendance at high-cost yet low-return for-profit schools, and the lingering effects of the Great Recession on incomes and employment. My brief provides details on the resulting consequences: growing numbers of households with debt, increasing levels of debt, and the increasing tendency to postpone repayment of this mounting debt.