Michael Reher was a 2018 Meyer Fellow at the Joint Center for Housing Studies.

Have Changes in Financing Contributed to the Loss of Low-Cost Rental Units and Rent Increases?

Over one-third of U.S. households rent their home and, since the Great Recession, rents for many of these households have grown faster than either inflation or renters’ wages. The years since the Great Recession have also seen record-high levels of residential improvement activity, as well as significant drops in the number of low-rent units with a rise in higher-rent ones.

While these changes have spurred significant academic and popular discussions about affordability, gentrification, and urban change, most of these conversations have overlooked the fact that changes in financing practices may have contributed to the rent increases and loss of low-cost units. I examine this question in a new working paper and find that much of the growth in apartment improvements, the rise in rents, and the loss of low-income units were the result of a change in bank regulations and the interplay between low-interest rates and the rules that govern underfunded public pension funds.

I start by documenting the surge in renovation activity since the Great Recession. Specifically, data from Trepp LLC (a provider of data and analytics to the global securities and investment management industries) indicates that the share of multifamily housing units that are renovated each year, which had dropped precipitously with the onset of the Great Recession, vigorously recovered from its 2008 low, surpassed its pre-Recession high by 2014, and now is higher than ever (Figure 1). I also estimate that the increase in improvements was responsible for 65 percent of the post-Recession growth in rents. 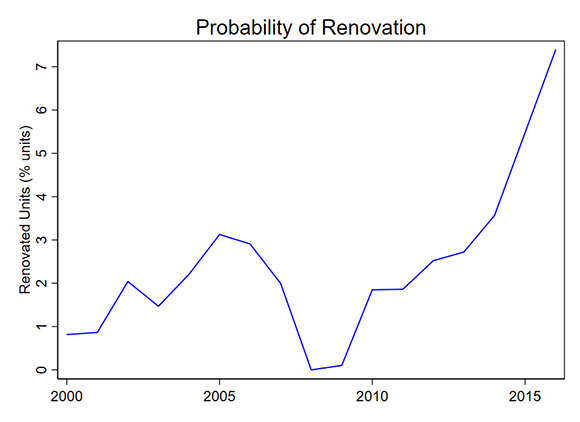 Next, I turn to two changes that may have contributed to the growth in improvements by channeling financing to improvements and away from other types of residential investment. The first is High Volatility Commercial Real Estate (HVCRE) bank capital requirements introduced in 2015 in accordance with the requirements of the 2010 Dodd-Frank Wall Street Improvement and Consumer Protection Act. These regulations, which were supposed to make the financial system more stable by requiring banks to have greater reserves for riskier loans, categorized loans secured by improvements on rental properties as significantly less risky than loans for the construction of new rental units. Because this meant that banks had to keep larger capital reserves on hand for the latter loan type, this distinction introduced a wedge in the effective cost of funds for different types of loans. This, in turn, might have incentivized banks to prefer improvement projects over new construction.

To see if this was the case, I used loan-level data from Trepp LLC to compare multifamily mortgage loans made by banks (which were subject to the new rules) to those made by specialty nonbank lenders (which were not). I found that the HVCRE capital requirements increased banks’ supply of credit for improvements.

Consequently, there was a pronounced increase in improvement activity at properties located in counties where regulated banks historically had made a greater share of the real-estate related loans. In total, I found that the regulatory change accounted for 44 percent of real improvement activity over 2015-16, when such activity increased sharply. It also led to an aggregate reallocation from construction to improvement projects (Figure 2). However, the long-term effects of this particular policy shock are uncertain, since HVCRE regulations changed substantially in 2018 with the passage of the Economic Growth, Regulatory Relief, and Consumer Protection Act. 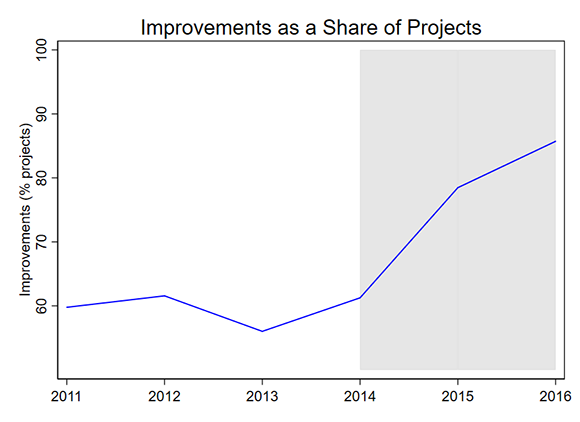 My second analysis focused on a shift in the supply of financing for private equity real estate funds. These funds, which comprise half of aggregate investment in rental markets, typically take an equity stake in residential investment projects. They raise money in discrete rounds and rely on large institutional limited partners, including public pension funds, which account for about 40 percent of the investors in private equity real estate funds.

Many of these pension funds are underfunded and, as others have shown, as their underfunding gap grows, so does public pension fund managers’ propensity to make riskier investments, which will produce higher returns if they are successful. Moreover, this behavior has been especially pronounced when safe yields are low, as they have been since the onset of the Great Recession. In addition, Governmental Accounting Standards Board (GASB) rules provide an incentive for such risk-shifting, since they allow public pensions to use their expected rate of return to set required contributions and discount actuarial liabilities (instead of using a lower risk-free return, which many have argued is the appropriate benchmark for these calculations).

Applying these observations to real estate, I used data from Preqin (a provider of financial data and information on the alternative assets market) to show that more-underfunded pensions responded to declining safe yields by reallocating money away from safer private equity funds (which pursue buy-and-hold strategies that produce steadier but lower returns) to riskier funds (which make improvements and generate higher, but more volatile returns). To trace reallocation at the pension level down to real investments, I used the fact that investing relationships are sticky. Specifically, I found that, relative to other managers, real estate fund managers who were historically reliant on more-underfunded pension managers for fundraising increased their real investment in improvements over 2010-2016. In fact, I estimate that, had all public pensions been fully funded in 2008, aggregate investment in real improvements would have been 15 percent less than it actually was between 2010 and 2016.

Collectively, my findings indicate that the regulatory changes and the changes made by public pension fund managers together accounted for around one-third of real improvement activity over 2010-2016. During this period, quality improvements accounted for 65 percent of rent growth (though this number includes improvements not necessarily created by the previous two shifts). More broadly, these findings imply that finance – and seemingly unrelated changes in financial regulations and practices – can have significant impacts not only on rents and housing quality but on urban neighborhoods as well.