The State of the Nation's Housing 2014 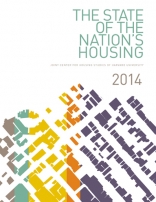 With promising increases in home construction, sales, and prices, the housing market gained steam in early 2013. But when interest rates notched up at mid-year, momentum slowed.

Click map to launch (may take a few seconds to load)

The State of the Nation’s Housing 2014 was released by live webcast on Thursday, June 26. The webcast featured a panel discussion and viewers were able to tweet questions using the hashtag #harvardhousingreport.