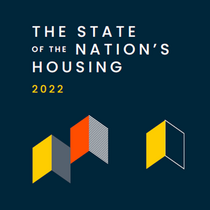 CAMBRIDGE, MA – After a record-shattering year in 2021, the housing market is at an inflection point. Higher interest rates have taken some heat out of the homebuying market, and the large number of apartments under construction should bring some relief on the rental side. For lower-income households and households of color, though, the pressure of high housing costs is unlikely to relent. According to The State of the Nation’s Housing 2022, a new report from the Harvard Joint Center for Housing Studies out today, the surge in the prices of gas, food, and other necessities has made matters worse, especially now that most pandemic emergency government supports have ended.

The Soaring Costs of Housing

The costs of housing continue to climb. Home price appreciation nationwide hit 20.6 percent in March 2022, marking the largest jump in three decades, and is continuing to rise. The runup has been widespread, with 67 of the top 100 housing markets experiencing record-high apprecia­tion rates. [INTERACTIVE CHART] Meanwhile, rents were up 12 percent in the first quarter of 2022, with increases in several metro areas exceeding 20 percent. “Rents for single-family homes rose even faster, pushed up by increasing demand for more living space among households able to work remotely,” says Daniel McCue, a Senior Research Associate at the Center. “Adding to the pressure, investors moved aggressively into the single-family market over the past year, buying up moderately priced homes either to convert to rental or upgrade for resale.”

Housing Demand on the Rise

Surprisingly strong household growth throughout the pandemic contributed to the sharp rise in housing costs. Much of the jump was among millennials; an uptick in new household formations among adults under 45 tacked on an additional 400,000 annually to household growth over the past five years. Meanwhile, the number of older-adult households is also growing rapidly with the aging of the baby boomers, exacerbating the need to adapt the housing stock and make it more accessible. Over the long term, though, housing demand is set to decline dramatically; population growth, the primary driver of household growth, is now at a 100-year low as birth rates have fallen, death rates have risen, and immigration has slowed to a trickle. [INTERACTIVE CHART]

With interest rates rising, on top of double-digit home price increases, the income and savings needed to qualify for a home loan have skyrocketed, raising the financial hurdles for first-time and middle-income buyers. Potential homebuyers saw monthly mortgage payments on the median-priced US home rise by more than $600 over the past year. “At today’s prices, the typical downpayment that a first-time buyer would need for a median-priced home is $27,400,” says Alexander Hermann, a Senior Research Analyst at the Center. “Without help from family or other sources, this would rule out 92 percent of rent­ers, whose median savings are just $1,500.” [INTERACTIVE CHART]

The massive windfall from rapid home price appre­ciation has widened the wealth gap between homeowners and renters. At last measure in 2019, the median wealth of homeowner households was $254,900—about 40 times the $6,270 median wealth for renter households. Because of their relatively low homeown­ership rates, many Black and Hispanic households missed out on these equity gains. Moreover, the racial/ethnic disparities are troubling among those who do own homes. In 2019, the median net wealth of Black homeowners ($113,100) was just over a third of that of white homeowners ($299,900) and the median net wealth of Hispanic homeowners ($164,800) was still roughly half of white homeowners. At least in part, these disparities reflect consistently lower home valuations in neighborhoods that are predominantly Black or Hispanic.

Housing Construction at a New High

After trailing the pace of household growth for almost a decade, residential construction has finally picked up. Single-family starts hit 1.1 million in 2021, exceed­ing the million-unit mark for the first time in 13 years. Multifamily starts were also at a 30-year high, but supply-chain delays have lengthened the time to completion, leaving some 1.64 million homes still under construction in April 2022, which was higher than at any time since 1973. Together with climbing interest rates, the strong pipeline of new housing should help to slow the rise in home prices and rents.

The Outlook for Housing

Despite the chilling effect of high costs and rising inter­est rates, the near-term outlook for housing demand is still largely positive. Demographic shifts are favor­able, unemployment is low, and wage growth remains strong. But housing demand hinges directly on the abil­ity of fiscal policymakers to successfully cool inflation without causing a recession. “There is also the longstanding challenge of producing affordable homes, given the high cost of build­ing materials and land as well as the shortage of labor,” says Chris Herbert, Managing Director of the Center. “The lessons learned during the pandemic have led to a num­ber of proposals to greatly expand the housing safety net and provide increased support for first-generation homebuyers. While these measures have yet to be implemented, it is impor­tant to continue the policy debate over the best approaches to making housing affordable for all.”

The State of the Nation’s Housing 2022 will be released in a live webcast today at 4:00 pm Eastern. Registration required.