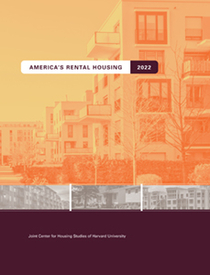 CAMBRIDGE, MA – Rental housing demand came roaring back in the second year of the pandemic, reducing vacancy rates and driving up rents, according to America’s Rental Housing 2022, a new report released today by the Harvard Joint Center for Housing Studies. The report indicates that some of the rental rebound reflects the lack of inventory in the for-sale market, which has kept many higher-income renters from buying homes. At the same time, however, many lower-income households, and especially lower-income households of color, still struggle to pay the rent.

After a cooldown early in the pandemic, rental housing markets heated up again in 2021. With this resurgence in demand, the overall rental vacancy rate dropped to just 5.8 percent—its lowest reading since the mid-1980s. Strong demand also caused rents to increase; asking rents for all professionally managed apartments spiked in the third quarter last year, led by a 13.8 percent jump for units in higher-quality buildings.

Although unprecedented levels of federal assistance helped many tenants stay up to date on rent throughout the pandemic, lower-income renters, and especially lower-income renters of color, were hard-hit by income losses and more likely to fall behind. Nearly a quarter of Black renters were behind on rent in the third quarter of 2021, as well as 19 percent of Hispanic renters. The share of Asian renter households in arrears was slightly lower at 18 percent, while the share of white renter households was half that, at 9 percent. [Interactive] “This disparity reflects long-term discrimination in labor markets that has consigned many households of color to low-wage jobs in the service industry,” says Chris Herbert, Managing Director of the Joint Center for Housing Studies. "And this sector suffered the most drastic employment cuts over the past two years, which has only compounded existing inequalities."

Putting further pressure on rental markets, higher-income households have increasingly turned to renting, driving nearly 70 percent of total renter household growth between 2009 and 2019. At least part of the growing popularity of renting among higher-income households is due to tight conditions in the for-sale market. Skyrocketing home prices and low for-sale inventories have put homeownership out of reach for many would-be buyers; typical home values were climbing at an 18.9 percent annual rate in September 2021, up from 5.7 percent the year before. [Interactive] And given the growing number of amenity-rich rental units in desirable locations, some higher-income households simply prefer to rent. At the same time, the increasing availability of rental options outside of central cities—in particular, single-family homes that provide more space for families—spurred a 3.6 million increase in renter households in suburban and small metro locations. [Interactive]

However, rental housing across the US continues to be highly concentrated in just a few neighborhoods and largely absent in others, limiting where renters can live. “Single-family only zoning and other density restrictions block the development of multifamily housing in many communities, thereby excluding renters from many neighborhoods,” says Whitney Airgood-Obrycki, a Research Associate at the Center and lead author of the new report. “Given that people of color are more likely to have lower incomes and to rent rather than own their homes, the geographic concentration of rental housing helps to perpetuate patterns of racial and socioeconomic segregation.”

Additionally, as high-end apartments continue to dominate rental construction, the country’s stock of low-cost rentals is shrinking. The number of units renting for less than $600 fell by 3.9 million between 2011 and 2019. [Interactive] And some 17.6 million rentals—40 percent of the nation’s supply—are located in areas with at least moderate risk from threats caused by climate change. Another urgent need is to modify rental housing to accommodate the aging population. The number of renter households headed by a person age 65 and over has already climbed to 7.2 million and will continue to rise over the next two decades.

“This is a pivotal moment for national housing policy,” says Herbert. “The pandemic has brought the long-simmering rental affordability crisis to the fore, and the current administration supports large-scale investments in both new and existing rental housing, as well as in subsidy programs. By creating a comprehensive, well-funded housing safety net, the nation has the opportunity to pull millions of households out of poverty, address longstanding inequities in housing delivery, and ensure that every household has access to a decent and affordable home.”

America’s Rental Housing 2022 will be released in a live webcast today at 12:00 pm ET featuring:

Principal funding for this report was provided by Wells Fargo