Shannon Rieger was a Research Assistant at the Center, who worked on issues related to homeownership, housing affordability, and community development.

With the Foreclosure Crisis Behind Us, Have We Stopped Adding Single-Family Rentals?

A decade of growth in the single-family rental market has fundamentally reshaped the nature of rental housing across the country, with states hard-hit by the foreclosure crisis seeing particularly notable changes, according to Joint Center analyses of data from the American Community Survey (ACS) and other sources. Our review also showed that the stock of single-family rental homes, which grew dramatically between 2006 and 2014, has been roughly stable for the last few years.

According to the ACS data, the nation’s stock of single-family rentals grew from 12.2 million units to 16.1 million units in 2016, with virtually all of the growth (99 percent) occurring between 2006 and 2014. This 32 percent increase in the single-family rental stock far outpaced the 11 percent increase in the nation’s stock of multifamily rental units, which grew from 26.0 million to 28.9 million between 2006 and 2016.

However, most of these new rental units were not new construction. According to our analysis of data collected by the US Census Bureau, between 2006 and 2016, only 366,000 new attached and detached single-family homes were built as rental units. This, in turn, indicates that about 3.5 million of the single-family rental units added to the stock 2006–2016 were existing structures that had previously been owner-occupied homes.

This trend of converting single-family homes to rentals was unevenly distributed across the country, with the greatest increases occurring in the states with higher than average foreclosure rates, according to JCHS analysis of data from the Mortgage Bankers Association and the ACS (Figure 1). For example, between 2006 and 2016, Nevada’s stock of single-family rental units grew by 63 percent—faster than any other state in the country. And the foreclosure start rate in Nevada peaked at 3.8 percent in 2009, the highest rate of any state 2006–2016 and more than double the nation’s peak rate of 1.4 percent. 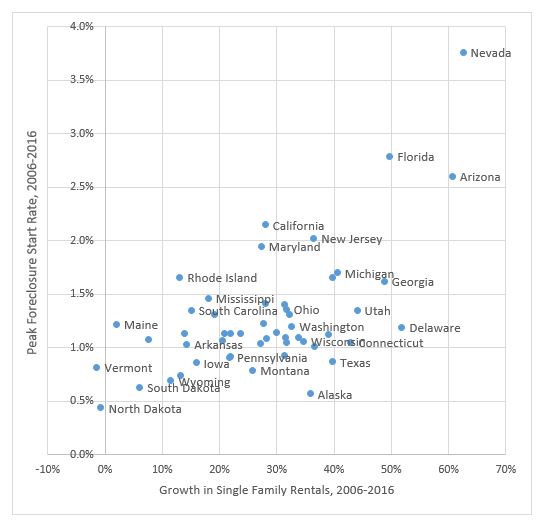 Note: Single-family rentals include detached and attached single-family homes. Stock estimates include renter-occupied units and units that are vacant for-rent. The MBA National Delinquency Survey reports the rate of mortgage loans that are in foreclosure as a percentage of the number of loans serviced during the quarter. The survey sample includes about 85% of the US market for first-lien 1-4-unit mortgages.