Who Owns Rental Properties, and is it Changing?

Institutional investors own a growing share of the nation’s 22.5 million rental properties and a majority of the 47.5 million units contained in those properties, according to the US Census Bureau’s recently released 2015 Rental Housing Finance Survey (RHFS). The changes are notable because virtually all of the household growth since the financial crisis has occurred in rental units, with more than half of the growth occurring in single-family rental units.

According to the RHFS, individual investors were the biggest group in the rental housing market in 2015, accounting for 74.4 percent, or 16.7 million rental properties, followed by limited liability partnerships (LLPs), limited partnerships (LPs), or limited liability companies (LLCs) (14.8 percent); trustees for estates (4.1 percent); and nonprofit organizations (1.6 percent) (Table 1). However, because the share of rental properties owned by individual investors tends to decrease with the property size, individual investors owned less than half (47.8 percent) of rental units, followed by LLPs, LPs, or LLCs (33.2 percent), trustees for estates (3.3 percent), real estate corporations (3.3 percent), and nonprofit organizations (3.2 percent). 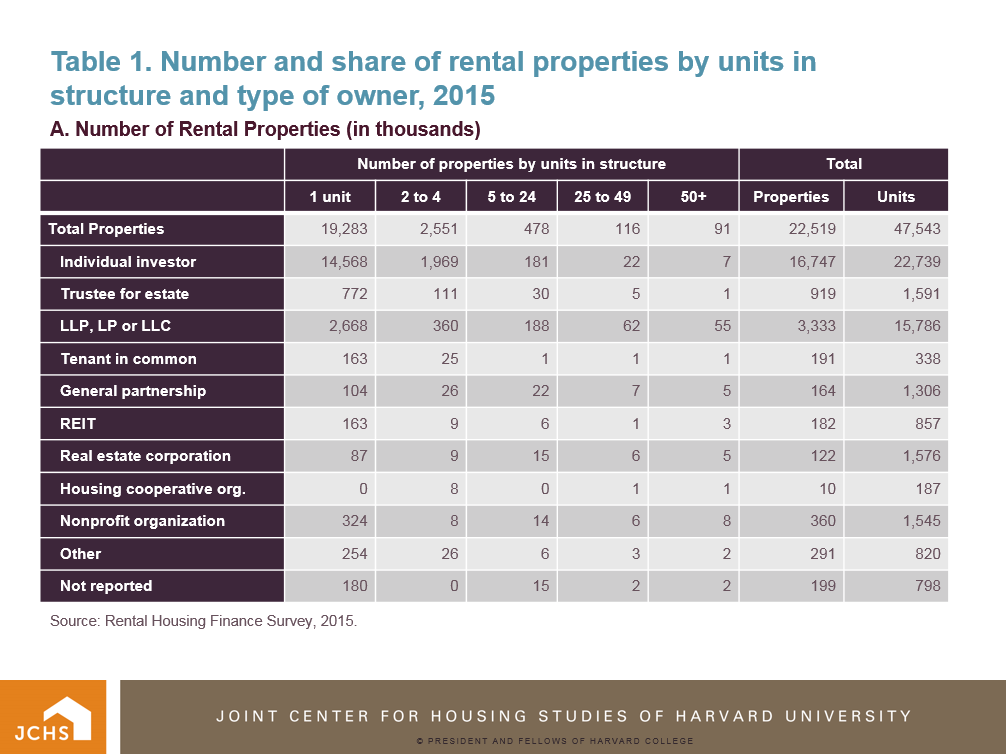 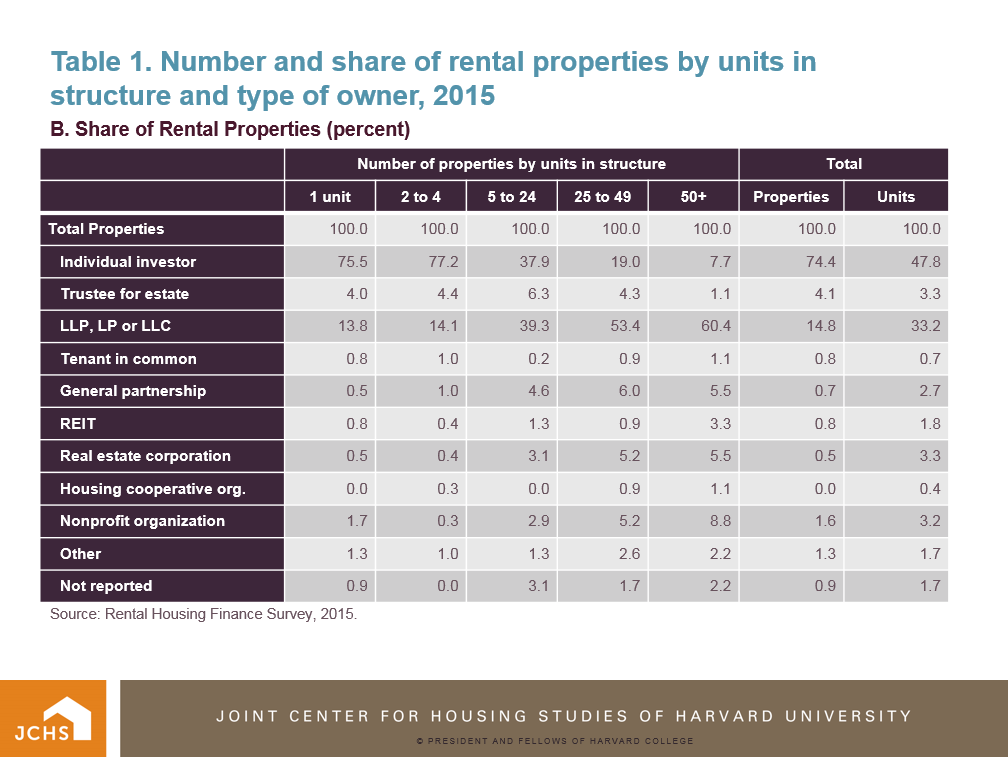 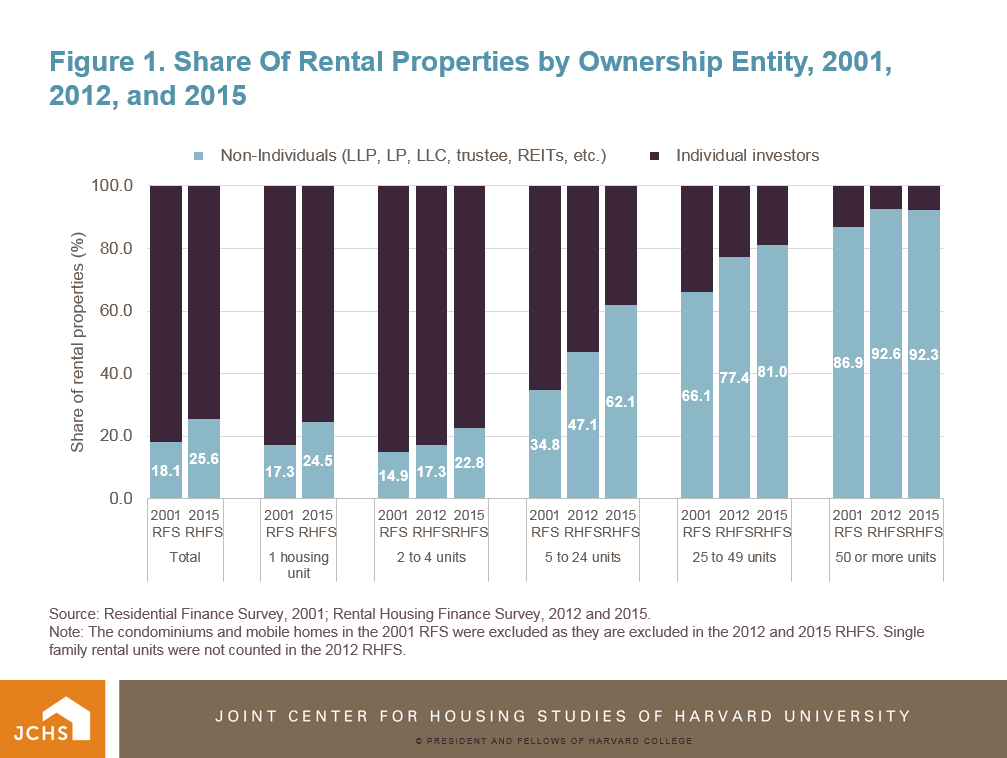 While individual investors (often called “mom-and-pop landlords”) still owned about three-quarters of all single-family rental properties in 2015, the share of those properties owned by institutional investors rose from 17.3 percent in 2001 to 24.5 percent in 2015. However, during this time, many individual landlords reportedly created their own LLCs and transferred ownership of their property to protect themselves from liabilities and take advantage of tax benefits. As a result, the figures for single-family rentals may understate the number of mom-and-pop landlords.

Finally, the 2015 RHFS also provides useful information about when these changes occurred. Overall, non-individual investors accounted for about 16 percent of rental properties acquired from 1980 to 2004. That changed dramatically in the years after the financial crisis. Non-individual investors bought 28 percent of rental properties sold between 2010 and 2012 and 49.3 percent sold between 2013 and 2015 (Figure 2). Moreover, this shift was particularly pronounced for properties with 1 to 4 units (compared to those with 5 or more units). 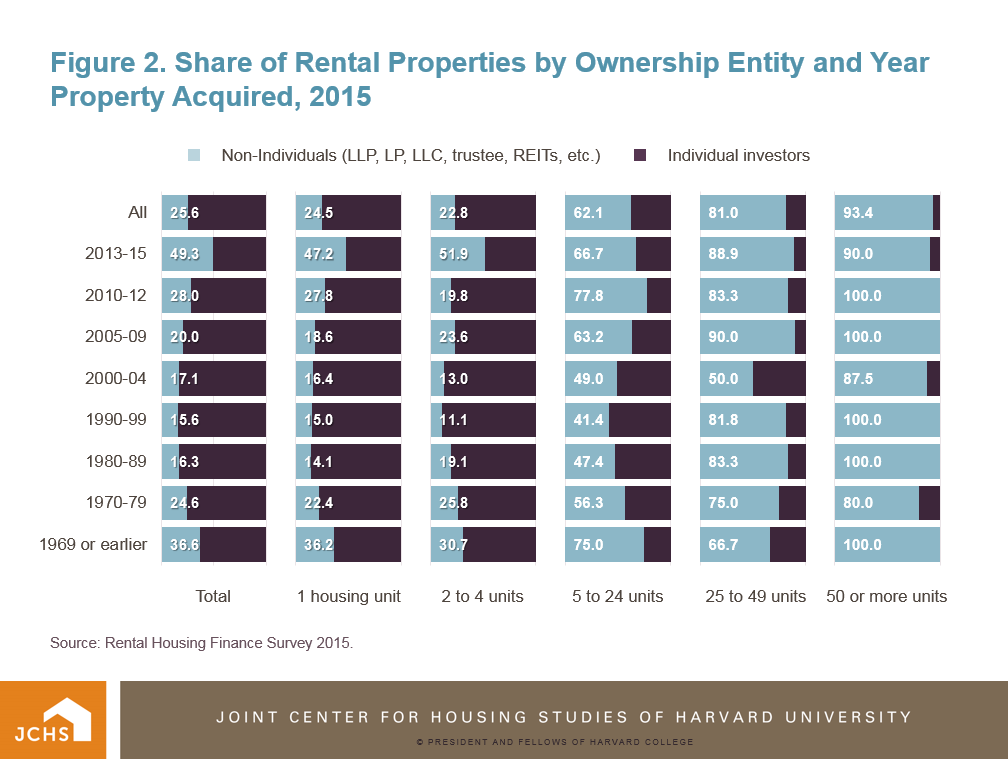 Despite potential implications for both renters and the broader housing market, there have been relatively few studies assessing the impacts of changing ownership patterns for rental properties. However, some research suggest that the changes are more than just paperwork. Illustratively, a 2016 discussion paper published by the Federal Reserve Bank of Atlanta reported that large corporate landlords and private equity investors of single-family rental homes in Fulton county, Georgia were far more likely to file eviction notices than small landlords in the county. Hopefully, the changes documented in the 2015 RHFS will spur additional research on how ownership patterns affect such key issues as rental affordability, housing instability, and the upkeep of rental units.