Recent discussions about potential federal anti-poverty programs underscore that seemingly mundane choices about geographic units could have important impacts on how available funds are distributed.

In a recent New York Times op-ed, Hillary Clinton asserted that if elected, she would develop an anti-poverty strategy modeled on the “10-20-30” approach put forward by Congressman James Clyburn (D-South Carolina), the number three Democrat in the House.

Initially proposed during the drafting of the American Reinvestment and Recovery Act, the 10-20-30 approach called for 10 percent of funds of federal programs subject to this plan be directed to persistent poverty counties where at least 20 percent of the population has been living in poverty for 30 years.

While this may have worked for the original intent of appropriately directing the rural development funds, the county based approach may not necessarily work across a wider range of programs and may not be the right approach to address extreme poverty.

While most discussion about the anti-poverty proposal has been focused on the money that would be made available, the geographic level used to allocate funds – be it counties, neighborhoods or something else – will significantly affect where the money would be spent and who would benefit from it.

Most notably, basing the selection criteria at the county level would tend to allocate money mostly to rural parts of the United States. Shown below is the map of persistent poverty counties (defined as any county that has had 20 percent or more of its population living in poverty in the 1990, 2000 and 2010 decennial censuses).

The county-based approach results in a majority of persistent-poverty areas being rural counties spread across 30 states; (85 percent of these counties are in non-metropolitan areas) and this approach excludes many areas of extreme poverty in inner cities of urbanized areas such as Los Angeles (Los Angeles County), Detroit (Wayne County), Chicago (Cook County), Dallas-Fort Worth (Dallas and Tarrant Counties), Newark (Essex County, New Jersey) and the District of Columbia. 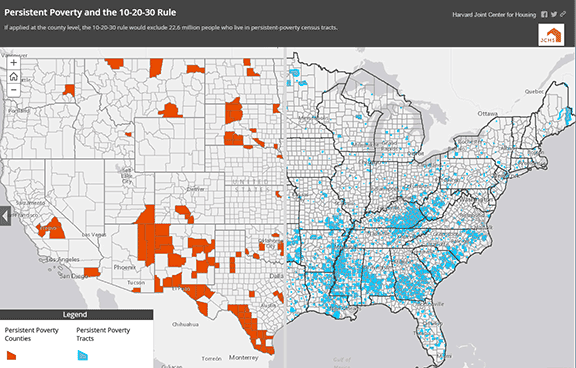 It should be noted that Clinton’s op-ed used the term ‘communities’ instead of ‘counties’ perhaps signaling that her application of the rule might be at a smaller geography than counties. Although, there have been other reports where she has been quoted to show support for Clyburn’s original formula with the use of the term ‘counties’, and it also appears that the formula has made its way into several congressional proposals, which makes it imperative to discuss the geography of its application.