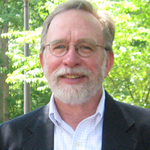 What are the Impacts of Fertility Rates on Housing Markets?

Since families with children are primary drivers of household formation and housing consumption, changes in fertility rates can have significant impacts on housing markets. But tracking and understanding those changes can be challenging, as illustrated by two seemingly contradictory high-profile accounts of changing fertility patterns that appeared earlier this year.

First came the Pew Research Center, which in January 2018 issued a report titled “They’re Waiting Longer, but US Women today are More Likely to Have Children Than a Decade Ago.” However, less than a month later, The New York Times published the seemingly contradictory headline: “American Women are Having Fewer Children than They’d Like.”

Answering these questions requires paying attention to both the measures being used to describe fertility trends and the data source used to measure the trend. Such an approach shows that it is quite possible for more women to become mothers and for all women to have fewer children overall.

The General Fertility Rate (GFR)—the number of births per 1000 women age 15-49—has been trending downward over the past decade, according to the National Center for Health Statistics (NCHS). The drop is due to sharp declines in the number of children born to mothers younger than 30, somewhat but not completely offset by increases in the birthrate for mothers older than 30. Consequently, the total fertility rate has declined (Figure 1).

Figure 1. The General Fertility Rate Has Been Declining Due to Steep Declines Among Young Mothers 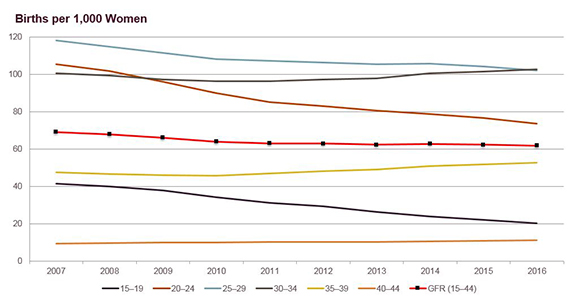 Note: Since births to women ate 45-49 are so few, they were excluded from this figure, which makes the GFR line an approximation of the General Fertility Rate.
Source: JCHS tabulations of National Center for Health Statistics, National Vital Statistics System, Data Brief 287, Births in the United States, 2016.

What about the increase in motherhood highlighted in the Pew report? Motherhood is measured in that report by the share of women in each cohort having ever had a live birth by age 40-44. While that report indicates that the share of mothers is rising, there are important questions about the magnitude of its reported increase in motherhood. Specifically, the Pew report is based on an analysis of the Current Population Survey’s biannual June Supplement, which asks women detailed questions concerning all children they have had over a lifetime. And these CPS data appear to show a significant recent increase in motherhood.

However, comparing the CPS data on the share of older women who have become mothers with vital statistics data from the NCHS suggests that the CPS may exaggerate the recent trend toward greater motherhood (Figure 2). Although the NCHS estimates are only available until 2010, the trends from the two data sources roughly parallel one another and show a sharp downward trend followed by a trend upward. But most importantly, the upward trend in the NCHS data began in 2000 and is more modest (a 2.1 percent increase over a 10-year period), while the CPS upward trend began in 2006 and is more dramatic (a 6.0 percent increase in 10 years). Significantly, most of the upward trend in the CPS since 2006 is accounted for by the change between 2010 and 2012, a period which accounted for more than half of the 6-point gain between 2006 and 2016.

Figure 2. Motherhood Is on the Rise, but Perhaps Not as Much as the Current Population Survey Indicates 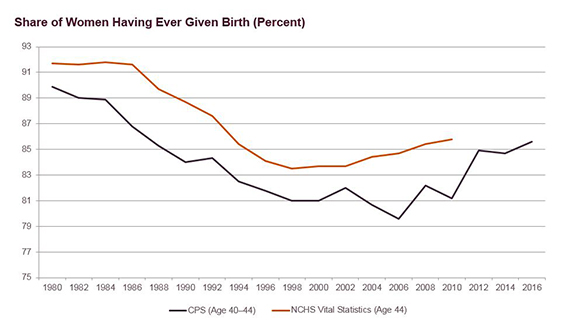 The NCHS percentages of women who have become mothers are higher, partly due to the fact that the NCHS women are slightly older (all age 44), while some of the CPS women (age 40-44) were still having children in their early 40s. The NCHS trend line is also much smoother because it is based on much larger number of people in the vital statistics database.

However, some of the differences are due to measurement errors that produced the lower motherhood shares in the CPS prior to 2012. As a 2015 Census Bureau working paper on this topic noted: “The June 2012 Current Population Survey (CPS) Fertility Supplement data showed a significant decrease from 2010 in the percent of women aged 35-44 who are childless… However, due to numerous changes in data and data processing, it is reasonable to think that some of the apparent changes shown in the data may be artifacts of changes in measurement, not an indication of an actual demographic shift.”

We should not be surprised that the more reliable NCHS data show that the percentage of all women age 44 who are mothers has been trending only modestly upward since about 2000. One key factor in this shift is that the percentage of women in this age group who are Hispanic also increased, rising form just over 10 percent in 2000 to just under 20 percent in 2016 (Figure 3). The growth in the share of women in their early 40s who are Hispanic is due to two trends. First, the number of Hispanic women age 40-44 has been increasing, as the younger migrants from previous decades approach middle age. Second, the total number of women age 40-44 has been declining because many members of the smaller Generation-X cohort are now entering their early 40s.

Figure 3. The Increase in Motherhood is Due in Large Part to the Growing Share of Hispanic Women 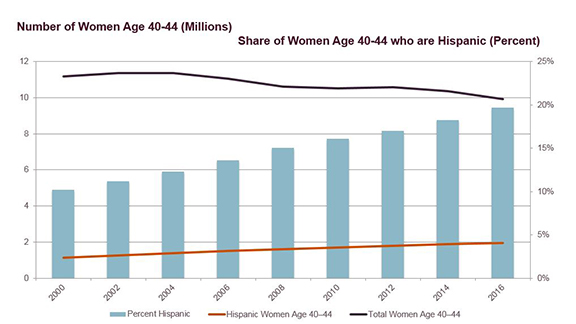 This is significant because Hispanic women at the end of their reproductive ages are more likely to have become mothers than non-Hispanics of the same age. Unfortunately, the NCHS fertility data are only available for all whites (including Hispanics) and all blacks (including Hispanics). Consequently, we cannot use the data to calculate motherhood by both ethnicity and race. However, the CPS, which does ask about both race and ethnicity, shows significant racial and ethnic differences in the share of women in their early 40s who have had at least one child. The Pew report, for example, which averaged CPS data for 2012, 2014, and 2016, calculated that 90 percent of Hispanic women in their early 40s had at least one child, compared to only 83 percent of non-Hispanic white women; 85 percent of non-Hispanic black women, and 86 percent of non-Hispanic Asian women.

The NYT article emphasized that the fertility decline in the US is consistent with declines in other developed countries; that American women are bearing far fewer children that they would like to; that declines in marriage (and sexual activity among unmarried women), along with increasing use of reliable contraception, are at the root of the fertility shortfall; and that the fertility decline has been widespread throughout the country. Regardless of the reasons, this delay in childbearing could have a variety of impacts not only on individuals, families, and society, but on housing markets as well.

Fewer births to teens and women in their early 20s, for example, should mean that more women are likely to complete high school, pursue higher education, and secure higher-paying jobs. The Pew report describes how the largest increases in motherhood have been among college-educated older women, the group with historically the lowest levels of completed fertility and the highest percent childless. Discounting the fact that these motherhood gains might not be as large as the CPS data indicate, and are partly driven by increases in college-educated Hispanics, such a trend could have important implications for housing demand. College-educated mothers are likely to have higher incomes which means they are more likely to have the financial resources to become homeowners, should the choose, or to rent larger units in locations better suited for growing families.

However, fewer overall births and smaller family sizes could impact housing consumption by making renting more likely or by reducing the demand for larger housing units. Moreover, fewer births will produce a smaller future labor force that may find it hard to support the very large generation of millennials when they reach retirement. If doing so requires higher taxes on young workers, then households may have less disposable income that might otherwise be used to pay for housing.

Regardless of the impact on housing, it is clear that some subtle but significant changes are likely to continue to affect both the overall fertility rate, and the total number of children in the US. The fertility decline would be further exacerbated if, as some policy makers are proposing, the country reduces the number of immigrants allowed to enter the United States, or prioritizes immigrants likely to have fewer children.