The Number of High-Income Renters Surged, Especially in the Nation’s Highest-Cost Markets

High-income renters are a growing share of all rental households, particularly in the nation’s most expensive metropolitan areas, according to analyses in our most recent America’s Rental Housing report and an online interactive tool released in conjunction with the report.

The shift comes amid tremendous growth in the national rental housing market, which added nearly 10 million new rental households between 2006 and 2016. These include 2.9 million “high-income” renters (those with real annual incomes exceeding $100,000). This is a 29 percent increase in a group that represented 9 percent of all renters in 2006 but accounted for 13 percent of renters in 2016 (Figure 1). 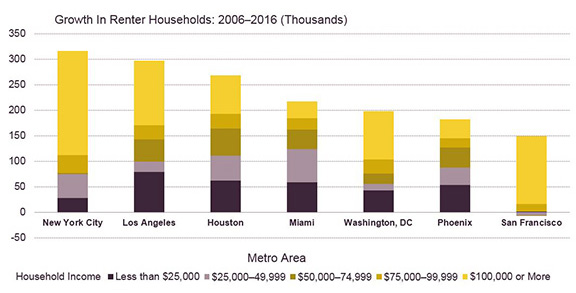 3. Nevertheless, low- and modest-income renters still outnumber high-income renters in nearly every metro. In 2016, over one-third (35 percent) of the nation’s renter households had incomes below $25,000, and nearly two-thirds (62 percent) had incomes below $50,000. Even in the nation’s ten most expensive markets, households making less than $25,000 a year still made up to 27 percent of all renter households in 2016, while those making more than $100,000 were 22 percent of the rental households (Figure 4). In fact, renters earning over $100,000 outnumbered those earning under $25,000 only in San Jose, San Francisco, Washington, DC, and Honolulu metropolitan areas. And even in San Francisco and San Jose, which have the largest share of high-income renters (at 35 and 42 percent respectively), roughly 1-in-5 renter households still had incomes below $25,000. Such figures underscore the fact that regardless of local market conditions, low-and moderate-income renters across the country struggle to find affordable rental housing, in part due to the increased demand created by the growing number of high-income renters.Figure 4: Even With High-Income Renter Growth, Low-Income Renters Still Outnumber High-Income Renters in High-Cost Metros 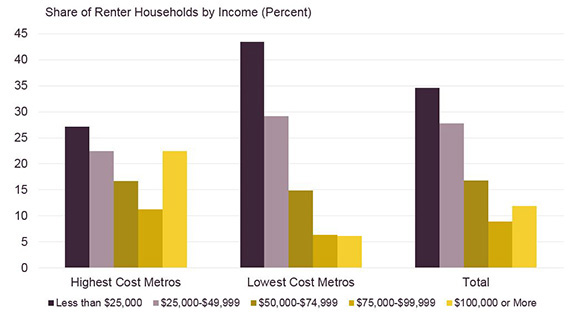