First-time homebuyers increasingly include never-married households and newly-formed households, according to a new working paper I co-authored with Shannon Rieger and Sean Veal. In the paper, we use the biennial American Housing Surveys (AHS) from 1997-2017 to document and discuss the profile of today’s first-time homebuyers and the extent of change over time in first-time homebuyers’ household and housing unit characteristics. Two of the clearest trends that emerge from this analysis are significant increases in the share of recent first-time homebuyers that have never been married and in the share that are forming new households. Taken together, these trends suggest that there may be a fundamental shift in the way that young households are approaching first-time home purchases, such as an increased willingness to purchase homes individually or with unmarried partners.

Beyond these specific findings, a primary goal of the paper is to produce and release published tables with detailed information about the household and housing unit characteristics of first-time and repeat homebuyers using the 1997-2017 AHS data. The paper is accompanied by detailed appendix tables that provide a unique resource for readers seeking information about the characteristics of first-time and repeat homebuyers. The primary limitation, however, is that the AHS implemented a redesign in 2015 that limits the comparability of estimates across 2013 and 2015. Thus, our discussion of trends focuses on changes from 1997-2013, although the figures display estimates for all years through 2017.

Moreover, tracking these figures over time reveals a clear shift from married households to never-married households (Figure 1). The married share of first-time homebuyers declined from 61 percent in 1997 to 46 percent in 2013. This decline is offset by an increase in the never- married share from 23 percent in 1997 to 41 percent in 2013. Over the same period, the share of first-time homebuyers who reported being divorced, separated, or widowed hovered between 13-15 percent in all years. Because the trends in marital status are not mirrored by similarly-large shifts in the age distribution of first-time homebuyers, it is unlikely that they are driven by demographic shifts like decisions to delay marriage and childbirth until later ages. Similarly, while this increase preceded the landmark Obergefell v. Hodges decision legalizing gay marriage throughout the United States, the magnitude of the shift is too large to be fully explained by an increase in homeowners that were same sex couples. 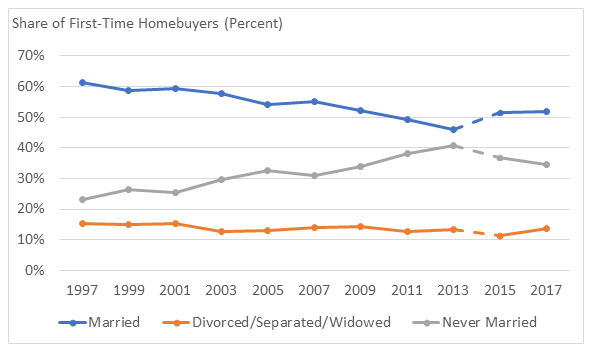 Note: The redesign of the American Housing Survey in 2015 complicates comparison of estimates between 2013 and 2015. Conversely, AHS sample and survey consistency permits reliable comparisons for 1997-2013 and 2015-2017.

Figure 2: Never-Married Share of Households by Year and Homebuyer Type 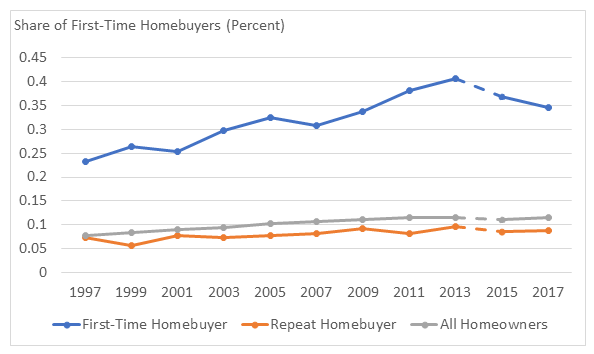 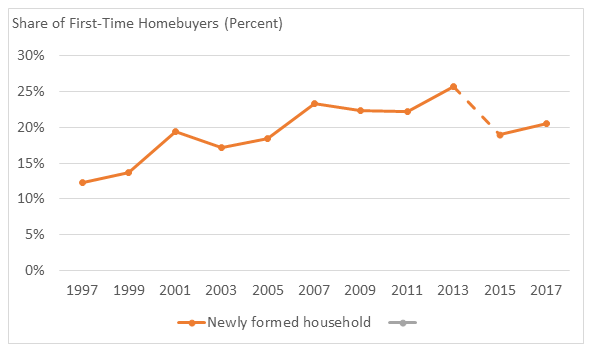 Detailed analyses of these trends to identify causal contributors and to decompose the relative contributions of alternative factors is beyond the scope of the analysis in the paper, which seeks only to document the characteristics of first-time homebuyers and to describe trends over time. But in both cases, the size of the changes over the past decade indicate that the shifts are widespread, suggesting that they merit the type of detailed analyses that might shed light on the various factors contributing to these shifts.