A significant decline in low-cost rental units over the past three decades has exacerbated housing affordability pressures faced by low-income renters, according to a new working paper I co-authored with Elizabeth La Jeunesse, Daniel McCue, and Jonathan Spader.

Although the overall rental stock grew by 10.9 million units between 1990 and 2017, the number of units renting for less than $600 per month (in constant 2017 dollars) fell by nearly 4.0 million (Figure 1). The data also show that this decline was concentrated in the last five years. After falling modestly in the 1990s and early 2000s, the stock of low-cost units rose in the aftermath of the recession. Since 2012, however, the number of units renting for under $600 has fallen sharply, accounting for a large share of the decline in low-cost units over the long run.

Figure 1: Evidence of a Major Decline in US Supply of Low-Cost Rental Units Since 1990 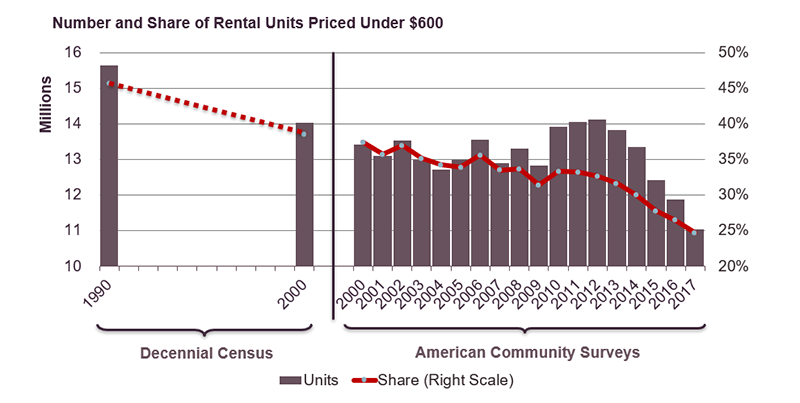 In the paper, we used US Census Bureau data—both Decennial Censuses and 1-Year American Community Surveys—to document the long-run decrease in low-cost rentals, discuss the geographic distribution of these declines, and explore the connections between the loss of low-cost units and the increased number of cost-burdened low-income renters. Key findings include:

The paper concludes with a brief look at the extent to which declines in low-cost units coincided with the growth in low-income renters with cost burdens, meaning they spent more than 30 percent of their income on housing. By this calculation, housing is affordable at $600 per month to households earning at least $24,000. However, from 1990 to 2017, the share of cost-burdened households earning less than $24,000 increased from 76 percent to 82 percent nationwide. Moreover, the largest increases generally occurred in states with the greatest declines in low-cost units.