Households headed by older adults are increasingly located in low-density suburbs, according to our latest Housing America’s Older Adults report. In a growing number of suburban neighborhoods across the country, adults age 50 and over comprise a majority of the population.

Overall, the report found that the number of people older than 65 grew from 35.0 million in 2000 to 46.1 million in 2016. Half this growth—just under 6 million persons—occurred in lower density metropolitan area census tracts, while an additional 13 percent occurred outside of metro areas (Figure 1). Moreover, more than a quarter of the increase was concentrated in medium-density tracts while only 9 percent occurred in the highest-density tracts within metro areas.

Note: Neighborhood densities are measured by the number of housing units per square mile in every metro area census tract, and divided into equal thirds based on density.
Source: JCHS Neighborhood Change Database.

As a result of these trends, low-density tracts within metro areas were home to 32 percent of the population age 65 or older in 2016, up from 26 percent in 2000. The share of those 65 and older living in moderate-density tracts stayed roughly constant at 28 percent, while the share living in the densest neighborhoods (27 percent to 22 percent) and non-metro areas (19 percent to 18 percent) declined slightly.

The aging of the existing population, rather than in-migration, was a key driver of the increase in older adults living in rural communities. In those non-metro places, the population under age 50 declined by 2.6 million persons between 2000 and 2016, even as the population age 50 and over increased by 4.0 million (including 1.5 million more people age at least age 65. Consequently, the share of adults age 65 and over comprised 17.7 percent of the total population in rural-area tracts in 2016, up 2.8 percentage points from 2000. In contrast, the 65-plus population rose 1.0 million persons in the most-dense urban areas even as the share of older adults in those communities rose by only 0.7 percentage point.

Given these population shifts, older adults comprise the majority of residents in a growing number of neighborhoods. Illustratively, between 2000 and 2016, the number of census tracts where most residents were over age 50 nearly tripled, rising from 1,499 tracts in 2000 to 4,764 census tracts—7 percent of all tracts—in 2016 (Figure 2).

Figure 2: In Just 16 Years, the Number of Communities With Majority Older Populations More Than Tripled 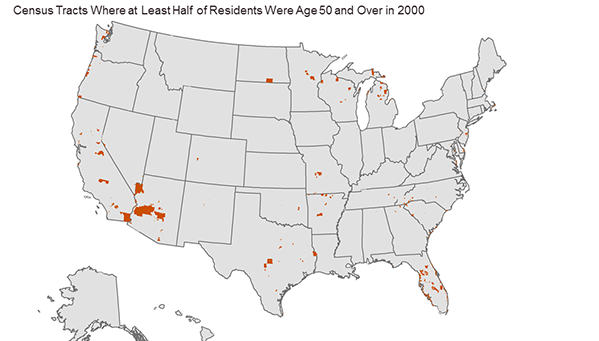 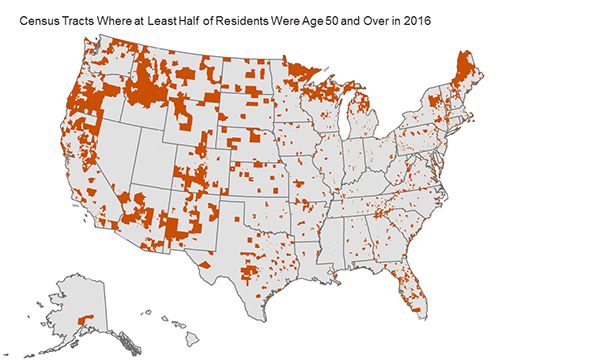 These majority-older adult tracts are especially concentrated in lower-density and non-metro areas. Just over 10 percent of census tracts in rural communities and 8 percent in the least dense neighborhoods within metro areas are majority older adult. On the other hand, older adults form a majority of the population in only 4 percent of the densest tracts.

Our analyses also found notable differences between older owners and renters and between older and younger households. In 2016, homeowners made up 78 percent of all households headed by someone over age 65. Fifty-three percent of these older homeowners resided in the least dense metro areas or in rural areas (Figure 3). In contrast, those areas were home to only 51 percent of homeowners under age 45, 35 percent of older renters, and 30 percent of younger renters.

Note: Neighborhood densities are measured by the number of housing units per square mile in every metro area census tract, and divided into equal thirds based on density.
Source: JCHS Neighborhood Change Database.

Older adults living in these lower-density places could face barriers to accessing desired services, community centers, and social networks given limited transportation options. For example, a 2010 survey by the National Center for Senior Transportation found that older adult transportation services—including public transportation, complementary paratransit, private taxis, transportation vouchers, and more—were all less likely to be available in rural areas than elsewhere. More recently, only 12 percent of homeowners (of all ages) outside of metropolitan areas reported having good access to bus or subway service in 2017—compared to 40 percent of respondents living within metro areas, according to American Housing Survey. Furthermore, the number of healthcare providers in rural areas is relatively smaller than the number in urban areas. (Of course, high-density urban areas aren’t necessarily accessible to older adults, especially those with disabilities. These communities face their own unique challenges.)

Problems related to transit access in low-density environments are potentially compounded by the fact that, compared to homeowners under age 45 in 2016, the typical older homeowner lived in a neighborhood with lower median incomes ($56,100 versus $60,600) and home values ($170,200 versus $175,100). Older homeowners in rural areas were even worse off, with median incomes of $44,500 and median home values of only $112,100. Similarly, the typical renter age 65 and over lived in a neighborhood with a median income of approximately $48,000 in 2016.

In sum, the number of older adults has grown considerably over the past several years. As many of these households, particularly older adult homeowners, age in place in lower-density communities, policymakers and practitioners alike will need to consider the significant challenges inherent in servicing a sprawling population with unique needs. This includes those related to housing but also related to healthcare, community, and mobility.