Smart home technology—widely understood as devices that enable remote control and/or monitoring of household systems—is expected to be a major area of growth for the remodeling industry over the coming years. Our Remodeling Futures Program recently conducted a literature review of major studies on this topic and identified seven key takeaways, as well as areas where further study is needed. Here’s what we know:

Figure 1: While Few Older Homeowners Have Smart Home Technology, Many Want It 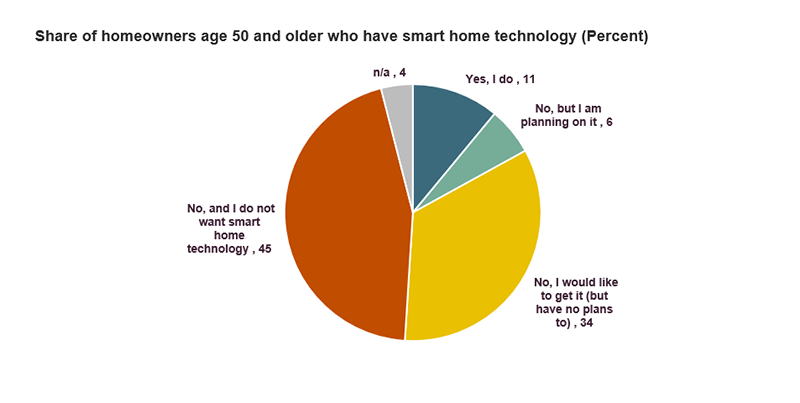 In short, we know a lot about the rapidly growing smart home tech industry but there are holes in our knowledge, particularly with regard to how this technology is actually integrated into remodeling projects. For example, we don’t know how smart home tech is commonly being integrated into remodeling jobs: Are general contractors offering these upgrades to clients, or do the upgrades primarily come though their sub-contractors? Or do most of the requests come directly from clients? To what extent are remodelers who specialize in aging in place upgrades aware that smart home tech can aid those efforts, and how often do they offer smart home upgrades? In addition, what is the role of manufacturers in driving installations of smart home tech products in the context of traditional home remodeling projects? A Joint Center for Housing Studies survey of general remodeling contractors is planned for the summer of 2019, which will help answer these and other related questions.