The Community Reinvestment Act (CRA) has helped spur small business lending in underserved communities and populations, according to a new working paper that I co-authored with Lei Ding and Raphael W. Bostic.

Enacted in 1977, the CRA sought to promote credit flows to disinvested neighborhoods – places where depository institutions (such as banks and savings associations) took in more deposit from local residents than they loaned to local businesses and residents. Under the law, federal regulators regularly review the entities to determine whether they are serving the credit needs of both low- and moderate-income (LMI) neighborhoods and the LMI individuals. LMI neighborhoods are defined as census tracts where median family incomes are less than 80 percent of the median family income for the surrounding area (the Metropolitan Statistical Area (MSA) or Metropolitan Division (MD) for urban tracts). Similarly, LMI families have income below 80 percent of the median income for the surrounding area. Lenders have incentives to comply with these goals because federal regulators consider an institution’s CRA performance when evaluating applications for a variety of business activities, such as mergers, acquisitions or even opening new branch offices.

In the paper, which is being published by the Joint Center for Housing Studies and the Federal Reserve Banks of Atlanta and Philadelphia, my co-authors and I used a natural experiment created in 2013 when the federal Office of Management and Budget (OMB) revised its delineations of the nation’s MSAs and MDs. As a result of the update, the median family incomes in those MSAs/MDs with changed boundaries were recalculated, which, in turn, changed the landscape of census tracts that met the CRA’s LMI guidelines. In particular, due to the revisions 549 of the 22,319 census tracts that had been considered LMI neighborhoods, no longer met that criteria. Moreover, 432 previously CRA ineligible tracts became newly eligible (Table 1).

Note: Tracts are restricted to those in 48 contiguous states and Washington, D.C.

Using a difference-in-differences framework, we compared the changes in the small business lending in those newly CRA eligible or ineligible tracts with those in comparable tracts over time, which enables us to see how the lenders respond to the incentives that the CRA provides. We found that when a neighborhood loses its LMI designation and becomes CRA ineligible it is treated by banking institutions less favorably (Figure 1). For example, at the national level (Model 1), becoming CRA ineligible causes an average decline of 3.3 small business loans (or 5.8 percent of the pre-2014 mean) and a decrease of 2.4 loan originations to smaller firms (or 9.3 percent of the pre-2014 mean). 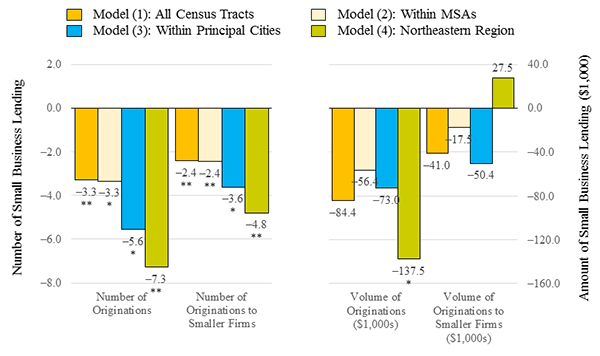 In contrast, gaining CRA eligibility status generally did not have a significant impact on small business lending (Figure 2). This likely is due to the fact that it may take significant time and expertise to increase the supply of credit in a newly eligible neighborhood, while it is relatively easier to cut back on lending in a newly ineligible tract. 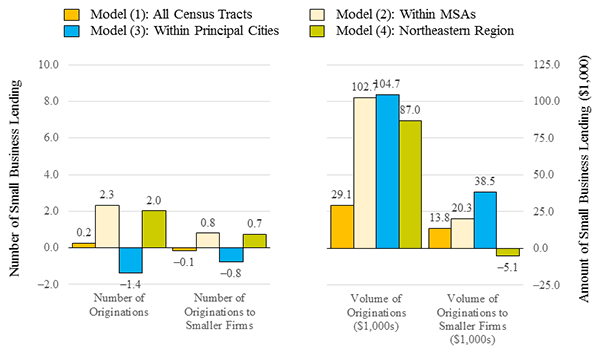 We further evaluate whether the CRA effects vary across neighborhoods and regions (Models 2–4 of Figures 1 and 2). In general, the CRA has a larger effect in neighborhoods within MSAs before/after the boundary changes, principal cities (main core cities or the largest cities of MSAs), and northeastern MSAs (while those in other regions are insignificant). As the CRA was in part motivated by concerns about redlining and discrimination issues in inner-city neighborhoods, it is not surprising to see that the CRA has a greater impact on these neighborhoods than on those in suburban areas and small cities. Also, the greater effects in northeastern cities might be explained by the fact that many of these tracts are located in metropolitan areas or in principal cities, and they are more spatially concentrated than those in other regions.

Overall, the empirical results are consistent with the contention that the CRA has made small business credit more accessible to its targeted areas. The findings are consistent with other studies of home mortgage lending which conclude that the CRA has helped provide access to mortgage credit for historically underserved population such as those published by Neil Bhutta, Daniel Ringo, or Lei Ding and Leonard Nakamura. Nevertheless, further research on unanswered questions – such as CRA’s impact on the quality and cost of small business lending, the lending patterns of non-depository institutions not covered by CRA – might reveal important insights that inform current efforts to build a new framework to modernize the law, particularly in light of the fact that the financial landscape has changed significantly in the more than four decades since CRA’s passage.