How Much of the Homeownership Rate Decline from 2005-2015 is Due to Foreclosures?

The U.S. homeownership rate declined to 63.5 percent in the first quarter of 2016, a drop of 0.3 percent from the prior quarter and 5.5 percent from its peak in 2004, according to the new homeownership rate figures released in April. [Figure 1]. This decline also appears in the seasonally-adjusted measure—which shows a decline of 0.1 percent—and follows two quarters of gains.

A natural question following this recent volatility is whether the recent downtick is the beginning of a further slide, or whether the volatility over the previous four quarters is a sign that the homeownership rate is finally levelling off. However, a comprehensive answer to these questions is beyond the scope of this blog post, other than to say that existing projections vary—for example, see Myers and Lee (2015), Urban Institute (2015), Mortgage Bankers Association (2015).

Foreclosure completions, short sales, and deed-in-lieu transactions contribute to the decline in the homeownership rate to the extent that they displace homeowner households. However, precisely measuring the contribution of these transactions to changes in the number of homeowner households is hampered by data limitations. Specifically, available data on the total number of foreclosed properties do not contain reliable information about whether properties are owner-occupied at the time of the foreclosure. Our estimates of the total number of foreclosure-related homeownership exits are therefore approximations and subject to the limitations of the data. Nonetheless, they shed light on the volume of foreclosures relative to the decline in the homeownership rate between 2005 and 2015.

First, CoreLogic data identifies a total of 9.6 million foreclosure completions, deed-in-lieu transactions, and short sales between Q3 2005 and Q2 2015. However, this total includes both transactions that displaced homeowner households and foreclosures affecting investor-owned properties or second homes. If we apply the Housing Vacancy Survey’s estimate that 60.2 percent of all housing units were owner-occupied in 2005, the CoreLogic data would imply that 5.8 million homeowner households lost their homes during this period. This estimate may slightly understate the number of owner-occupied foreclosures to the extent that multi-unit properties are more likely to be renter-occupied; however, a larger concern is that investment properties are likely to be over-represented among foreclosures. As an alternative, we also apply a more conservative estimate that 50 percent of foreclosure completions affected homeowner-occupied properties, producing a lower estimate of 4.8 million foreclosures among owner-occupied properties.

For comparison, the Federal Reserve Bank of New York’s Consumer Credit Panel identifies 11.5 million consumer credit reports with a new foreclosure appearing at any point between Q3 2005 and Q2 2015. However, this figure includes individuals with investment properties and second homes, as well as duplicate counts of foreclosures that appear on the records any cosigners of the mortgage. Raneri’s (2016) categorization of homeowners, vacation properties, and investment properties suggest that homeowners account for about 78.3 percent of credit bureau records with a new foreclosure during this period, suggesting that 9.0 million of the new foreclosures affected owner-occupants. Additionally, CPS data suggests that married spouses are present in 60.1 percent of homeowner households—in other words, the number of affected credit records would amount to 160.1 percent of the number of households. If we use this figure to approximate the number of cosigners, the data implies that approximately 5.6 million homeowner households experienced a new foreclosure during this period. While this estimate is a rough approximation, it is consistent with the range of 4.8-5.8 million foreclosure-related homeownership exits described above.

Comparing these figures with the size of the decline in the homeownership rate suggests that foreclosures have played a role in the homeownership rate decline—and underscores the need for attention to continued foreclosure volumes. The Current Population Survey estimates that the United States included 125.7 million households in 2015. The estimates of 4.8-5.8 million owner-occupied foreclosures would therefore amount to 3.8-4.6 percent of all 2015 households.

Comparing these figures to the decline in the homeownership rate is not quite apples-to-apples, because many households moved in with family members or went through other types of household formations and dissolutions during the foreclosure process. Additionally, the estimates described above are very rough approximations and must be treated as such, allowing for a relatively wide margin of error. Nonetheless, this comparison suggests that owner-occupied foreclosures might explain about half or more of the decade-long homeownership rate decline.

Figure 3 presents similar statistics for multiple age groups. The homeownership rate decline shows the percentage point difference in the age-specific homeownership rate between 2005 and 2015, showing an 11 percentage point decline among households aged 26-35 and a 10 percentage point decline among households aged 36-45. The age-specific estimates of foreclosure-related homeownership exits are calculated by apportioning the High (5.1 million) and Low (4.2 million) estimates across age groups using the age categories in Li and Goodman (2016)—which reports the age distribution in 2015 of individuals who had a new foreclosure appear on their credit record during the decade of the foreclosure crisis. 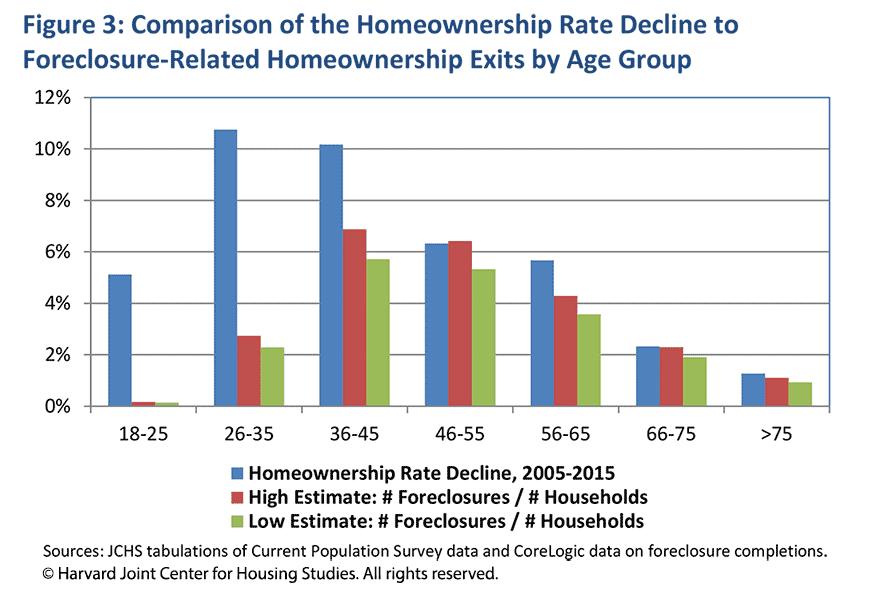