How Many Homeowners May Have Missed the Window to Refinance?

With interest rates ticking upward in 2018 and the prospect of further rate increases to come, the era of historically-low mortgage rates may be ending. While many homeowners took advantage of low interest rates by refinancing, many others did not. In a new research brief, I use the 2016 Survey of Consumer Finances to estimate the number of homeowners who did and did not refinance before the 2016 survey, discussing the implications for these homeowners’ long-term costs.

In 2016, 12.9 million homeowners (17% of all homeowners) held mortgages with interest rates above 5 percent. For these households, refinancing likely would have made sense during the period between 2012 and 2017 when interest rates fell below 4 percent, unless the remaining balance on the mortgage was small enough that the costs of the refinancing transaction would outweigh the savings. Table 1 shows that 9.2 million of these homeowners (13% of all homeowners) carried mortgage balances of $50,000 or more—a balance where the savings of a 1 percentage point interest rate reduction would likely be worth the costs to refinance.

Table 1: Cumulative Number and Share of All Homeowners with Interest Rates and Loan Balances Above Various Thresholds 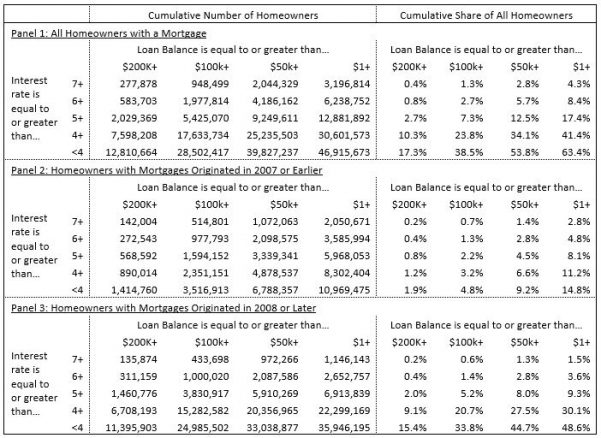 The 9.2 million homeowners with high-rate, high-balance mortgages in 2016 include 3.3 million homeowners (4.5% of all homeowners) with loans originated in 2007 or earlier—when lending standards were looser and interest rates averaged 1-2 percentage points higher than their 2016 levels. We unfortunately cannot observe whether these households did not refinance because they could not meet the tighter lending standards that prevailed after 2008 or for some other reason. However, regardless of the reason, the result is that these households continued to pay higher interest rates, while missing the opportunity to refinance to a lower rate.

The remaining 5.9 million homeowners (8.0% of all homeowners) held high-rate, high-balance mortgages originated in 2008 or later—when lending standards had been tightened in the wake of the foreclosure crisis. While some of these homeowners may not have qualified for a prime interest rate at origination, rising interest rates will remove the opportunity for such households to secure a lower interest rate in the future if they are eventually able to improve their credit history, build equity, or otherwise improve their credit profile. The result may therefore be higher total costs of homeownership over the long-term.

These estimates are based on homeowners’ self-reported interest rates from the Survey of Consumer Finances, so they may be subject to rounding or recall issues and should be interpreted accordingly. Nonetheless, they suggest that a sizable number of homeowners missed the opportunity to lower their long-term costs of homeownership by refinancing.

The new brief also shows that these refinancing outcomes are not distributed evenly across demographic groups. When compared to all mortgaged homeowners, those with pre-2008 mortgages with interest rates of at least 5 percent and remaining balances of at least $50,000 are less likely to be in the highest income and wealth quintiles or to have a 4-year college degree. Black and Hispanic homeowners are also more likely than white households to have pre-2008 high-rate high-balance mortgages. These outcomes raise concerns about the potential for disparities in recent refinancing behavior to contribute to disparities in the long-term costs of homeownership.