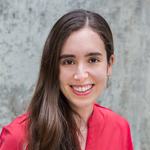 Rocio Sanchez-Moyano is a PhD candidate at the University of California, Berkeley in the Department of City and Regional Planning. Her research interests include access to homeownership and housing...

Hispanics are much less likely to be homeowners than non-Hispanic whites, and in a new working paper (presented earlier this year at the Center’s Symposium on Housing Tenure and Financial Security), I find that Hispanics are also less likely than whites to access homeownership in the suburbs. US homeownership policy has focused on the overall homeownership gap between minorities and whites, and reducing this gap should remain a policy priority. However, a second, equally important goal should be to ensure that the benefits of homeownership are also shared, because many of the benefits associated with homeownership, like wealth-building and access to safe neighborhoods with good schools, are highly dependent on the place in which a home is located.

Who becomes a homeowner, and in what type of neighborhoods? In Tenure and Location Choice Among Hispanic Households, I compare the own/rent and city/suburb decisions of white and Hispanic households. I focus on 89 of the largest metro areas in the US where city-suburb differences are most distinct, and classify cities and suburbs based on Census principal city and metropolitan statistical area (MSA) designations. Cities are the first named principal city and any other named city with at least 100,000 residents; suburbs make up the remainder of the MSA. Specifically, the analysis shows:

Many families prioritize homeownership, regardless of its location, over living in the suburbs. The American cultural imagination often places homeowners in a single-family house, behind the proverbial white picket fence. Indeed, two-thirds of Americans live in suburbs, and 64 percent of suburban dwellers own their homes. But nearly a quarter of homeowners live in cities. Suburban homeownership is the most likely outcome for household heads who are older, married with children, and have higher incomes. But when these types of households choose something other than suburban homeownership (possibly because they cannot afford to own in the suburbs), they are more likely to buy in the city over renting in the suburbs.

Who owns, and where, varies by ethnicity. The majority of whites are suburban owners, while Hispanics are roughly evenly divided between urban renting, suburban renting, and suburban owning. (Figure 1) Hispanics are generally more likely to live in cities than whites are, and a greater share of Hispanic homeowners are urban compared to white homeowners. Though homeownership gaps exist in both locations, on average it is smaller in cities. 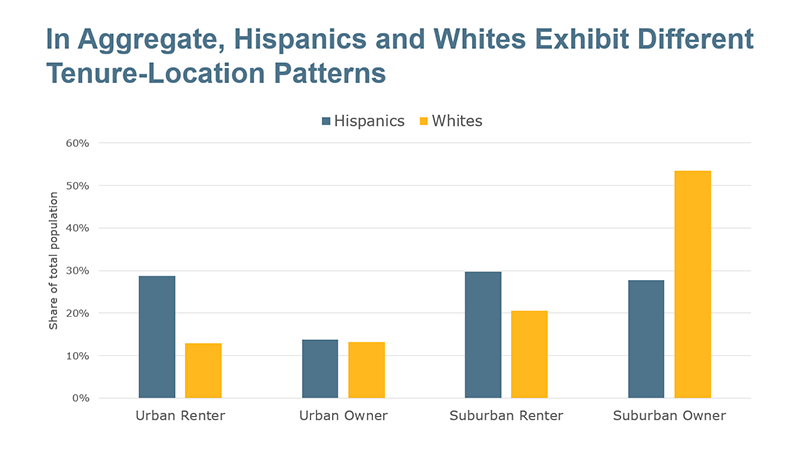 Hispanics face barriers to homeownership, especially in suburbs. Some of the disparities in homeownership outcomes between whites and Hispanics are due to the different characteristics of the average Hispanic or white family. For example, on average, whites have higher incomes, which partially explains why they are more likely to become suburban homeowners than Hispanics. But even after controlling for these differences between Hispanic and white households, Hispanics are still less likely to be homeowners in the suburbs, pointing to structural inequality in homeownership access – indeed, Hispanics need a higher income than whites to buy a house in the suburbs. Meanwhile, having a non-Hispanic spouse increased the odds of both homeownership and suburbanization among Hispanics, and its effects were strongest on suburban homeownership. These results point to lingering barriers to Hispanic homeownership, particularly in suburban areas.

Hispanics are more likely to live in places where housing is more expensive, making it even more difficult to buy a home. Metros with a large share of Hispanic households, such as Los Angeles, New York City, and San Jose, have higher median home values than other metro types, and both Hispanic and white households are more likely to be urban renters there. Households in these metros have fewer opportunities for homeownership due to the type of housing available in these markets. (Figure 2) And Hispanics in particular, who are more likely than whites to be urban renters in these areas, may be facing the joint pressures of rising home values and gentrification through rising rents, making saving for a downpayment even more difficult. 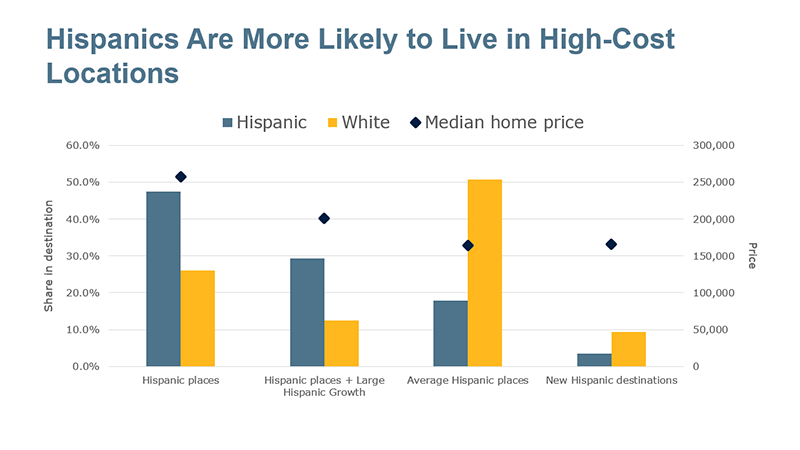 Hispanics are now the largest minority group in the US and their share of the population is expected to continue to grow. Understanding the Hispanic homeownership experience is critical due to both the US policy focus on expanding access to homeownership and the role homeownership plays in wealth-building and socioeconomic mobility. But where homeownership takes place shapes the geography of opportunity. My new paper highlights the ways in which Hispanic homeownership outcomes differ from those of whites, and the findings can help to inform broader policy issues related to residential segregation and asset building for Hispanic households.