Whitney Airgood-Obrycki is a Research Associate, working on research related to affordable rental housing for low-income households and serving as the project manager and lead author on America’s...

Have Incomes Kept Up with Rising Rents?

While renters’ median housing costs rose, in real terms, by 11 percent between 2001 and 2016, their incomes fell by two percent, according to our latest America’s Rental Housing report. Moreover, these changes were unevenly distributed across renter households, primarily affecting those who are least able to afford it. Housing costs (rents plus utilities) consumed an increasing portion of household income for renters who made less than the median income for all households. In contrast, incomes increased more than housing costs for higher-income renter households (Figure 1). 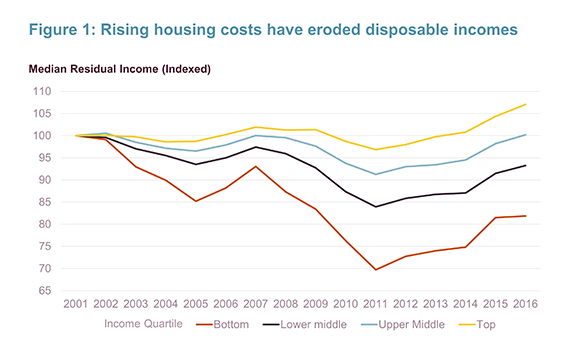 Notes: Income quartiles include both owners and renters. Median housing costs and household incomes are in constant 2016 dollars, adjusted for inflation using the CPI-U for All Items. Housing costs include cash rent and utilities. Indexed values are cumulative percent change.

Illustratively, the median monthly income for renters in the bottom income quartile fell by $50, dropping from $1,270 in 2001 to $1,220 in 2016 (a 4 percent decline). However, their median monthly housing costs increased by $70, rising from $690 to $760 (a 10 percent increase). This means that after paying for housing, renters in the bottom income quartile had less than $500 left to cover all other expenses (Figure 2), such as food, health care, insurance, transportation, and savings they could use for emergencies, retirement, education, repairs, or other needs. 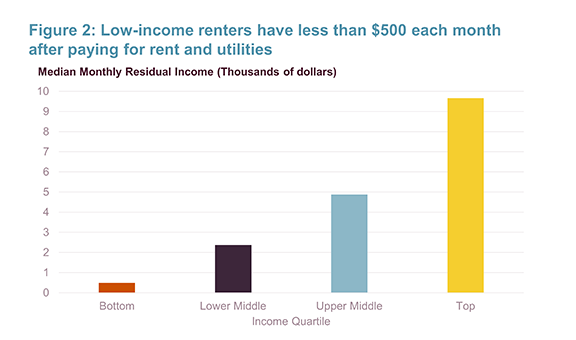 Notes: Income quartiles include both renters and owners. Housing costs include cash rent and utilities.

While residual incomes for the lowest-quartile group are slightly higher than they were in recent years, they are still 18 percent less than in 2001, when these households had $600 in residual income (in inflation adjusted dollars). Moreover, 48 percent of households in the lowest-income quartile consist of more than one person, and 27 percent have at least one child present.