Matthew Desmond’s new book Evicted: Poverty and Profit in the American City is just being released today, but it has already generated an amazing buzz which started with an article in the New Yorker a few weeks back, and has continued with reviews and commentary in major news outlets across the country. His bottom line conclusion that “without stable shelter everything else falls apart” is a message that housing advocates have long felt keenly. Given that the country’s serious housing challenges have failed to make an appearance at any Presidential debate, the substantial public attention the book is generating is profoundly important.

I got the chance to read an advance copy of the book myself and finished it this past weekend. As someone familiar with Desmond’s work and with a strong interest in trying to bring attention to the desperate straits that some 11 million renter households face by having to devote more than half their income to rent, I expected to be moved by the book’s up-close-and-personal depiction of struggling renters in Milwaukee. While I was certainly moved, what I didn’t expect was how challenged I would be by Desmond’s account. 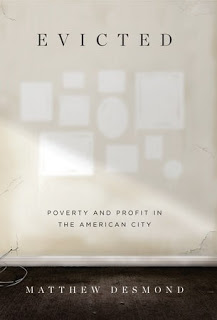 The Joint Center for Housing Studies has for many years been documenting both the magnitude and consequences of a lack of affordable housing through meticulous analysis of national survey data to help fuel the policy debate. But while numbers may inform the head, they don’t move the heart and so by themselves have a hard time moving the needle on policy. Housing advocates have come to appreciate the importance of personal stories in putting a face on the numbers. The Make Room campaign, launched by Enterprise Community Partners in the past year, is a particularly effective attempt at documenting powerful stories of struggling renters to help sway hearts as well as minds.

Desmond’s stories are also powerful, but in a very different way. The Enterprise campaign focuses on people who have been undone by sickness and other life events outside their control, who struggle to make a decent living, not from lack of trying, but by a lack of good paying jobs. In contrast, Evicted largely tells the story of people who are dealing with what often seem like self-inflicted wounds—drug addiction and questionable choices about how they spend what little money they have, people who are prone to violence and seem to make only sporadic attempts to work. In short, while Enterprise shines on a light on the so-called ‘deserving poor,’ Desmond doesn’t shy away—in fact, seems to seek out—the “undeserving” poor; people whose own families and social networks often refuse to offer assistance.

But through the course of the book, and with the support of hundreds of footnotes that draw on the academic literature and put forth more of Desmond’s own arguments, he builds a convincing case for how the circumstances of grinding poverty lead to choices that otherwise might be hard to understand and how drug addiction and a history of abuse and deprivation exert a powerful tide that is extremely hard to escape. In short, Desmond forces readers to confront their own embedded notions of the “deserving poor.”

One of the most thought-provoking aspects of the book for me was a footnote that confronts this issue directly. Desmond notes that liberals tend to ignore the “nastier, more embarrassing aspects of poverty.” Citing William Julius Wilson, he argues that this approach will ultimately fail to garner support anyway as the public wants to see these behaviors taken into account. Lambasting this approach, Desmond writes, “There are two ways to dehumanize: the first is to strip people of all virtue; the second is to cleanse them of sin.” He’s right. We do need to construct a policy argument that accounts for the sinners as well as the saints—not least of all because no one’s a saint.

Evicted has also challenged my thinking about how the housing market operates at the lowest rungs of the ladder. On its face, the rental market would appear to fit the classic competitive model: there are many buyers and many sellers, information on rent levels is fairly easily available, and there are few barriers to becoming a landlord. Sure, rents are quite high relative to property values, but wouldn’t high maintenance costs, the very real risk of non-payment of rent, and the costs of carrying out evictions account for the high rents? Maybe in part. But the examples Desmond details suggest that, even after taking these costs of doing business into account, the returns earned by landlords are extremely high. The most telling example is the $16,900 house in relatively good condition in a stable block. The mortgage payment on such a small mortgage would be less than $100 monthly. Even with property taxes and maintenance factored in, it wouldn’t take much rent to earn a decent return. And he notes the landlord had acquired other properties for as little as $5,000.

So why aren’t these markets more competitive? One barrier to entry is the lack of access to capital by those who are looking to live in these neighborhoods. Given what’s involved in managing these properties, there may be few landlords who are willing to take on property ownership under these conditions, limiting competition. Landlords also have over a barrel those tenants with a history of eviction, a criminal record, or no visible means of support. With the need for housing so fundamental, landlords can extract the lion’s share of a household’s income. As Desmond notes, researchers have focused a great deal of attention on the provision of subsidized housing but very little on the supply of non-subsidized, low-cost rental housing where a large majority of the poor find their homes. As this book makes clear, this is a major oversight.

So what does Desmond propose as policy responses? To begin with, he advocates for an entitlement program for low-income renters to obtain housing vouchers in the private market. This proposal is actually not that radical, as the Bipartisan Policy Center Housing Commission made this same recommendation. There is a strong case for such a policy, particularly for those at risk of homelessness who are profiled in Evicted. The short-term outcomes report by Abt Associates for the Family Options Study provides compelling evidence that providing housing vouchers to families coming out of the shelter system produces more stable living situations, reduces domestic violence and substance abuse, keeps families together, and reduces the number of school moves among children. And it achieves these results at no greater cost than the traditional assistance families receive coming out of shelters. Desmond also advocates for publicly provided legal assistance for renters in eviction hearings. Given the stories presented in Evicted, there is a clear need to level the playing field between landlords and tenants. If tenants have access to universal vouchers, landlords will have less to worry about in terms of unpaid rent.

The one part of Desmond’s recommendations that puzzled me is that he suggests relaxing housing quality standards as part of a universal voucher program to entice more landlords to participate. He argues in a footnote that in countries where such programs exist without quality standards, tenants are able to use the market power of their voucher to choose higher quality units. But given how the current system exploits renters’ vulnerabilities to accept appalling housing conditions, I would worry about leaving the market to determine this outcome.

In fact, Desmond makes a forceful case that exploitation of the poor thrives when it comes to essentials like housing and food. For that reason it might also have been useful to consider including some recommendations about expanding property ownership among those who would be less likely to exploit the poor—including the poor themselves. In cities like Milwaukee where home prices in inner city neighborhoods are so low, homeownership may be a cost-effective solution for some. More ownership of low-cost rentals by the public or non-profit sectors could also provide needed competition for for-profit landlords.

What’s also missing from his recommendations are supports beyond just rental assistance that are needed to address some of the root causes of instability, such as treatment for addiction and mental health disorders. Housing assistance is a critical step but by itself may not be sufficient to help people become stable tenants. But Desmond is focused on the housing part of the equation and so can’t be faulted for looking at all the ways we need to shore up our social safety net.

Overall, Evictedtells a powerful story and presents persuasive evidence about the fundamental importance of housing instability as a causeand a consequence of poverty, and in the process makes a compelling case for the need to foster housing stability as part of efforts to address poverty. Evicted is that rare book that will generate spirited thought and discussion not only among a general audience but also among those of us who spend a great deal of time trying to understand the critical interplay between housing affordability, poverty, and social mobility.

On Thursday, March 3 at 6 PM The Malcom Wiener Center for Social Policy at the Harvard Kennedy School is holding a book launch event for “Evicted: Poverty and Profit in the American City” with author Matthew Desmond, Co-director of their Center’s Justice and Poverty Project, along with a distinguished panel. View their event flier >