Changes in Supply and Demand at Various Segments of the Rental Market: How Do They Match Up?

A growing number of low-income renters are competing for a shrinking number of low-rent units. This is the basic conclusion of our new analysis of rental markets which compares changes in the rental supply at various rent levels with changes in the number of renter households at various income levels. The analysis also found that the rapid growth in high-income renters over the last ten years has outnumbered growth in high-rent units, and that similar trends are shared by nearly every metro area in the US.

Extending previous work on changes to the rental supply, our new analysis compares changes in the number of renters in five income levels between 2006 and 2016 with changes in the number of units that would be affordable for people in that income range over the same period of time. For example, if a household earning $26,000 per year paid 30 percent of its income on housing costs, (the standard metric of housing affordability) its gross rent would need to be $650 a month. Similarly, a monthly rent of $1,000 would be 30 percent of income for a household earning $40,000 per year. So how did the growth in renter households earning less than $26,000 per year between 2006 and 2016 compare with the growth in units renting for $650 per month or less during that period? And how did the number of renters earning less than $40,000 per year compare with the number of units renting for $1,000 or less?  The results for the nation appear in Figure 1. 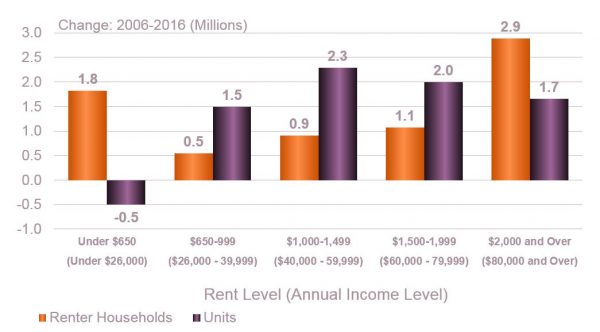 As Figure 1 shows, between 2006 and 2016 there were notable changes at both the low and the high ends of the market. Supply and demand at the low end of the market are going in different directions.  On the one hand, the number of renter households with annual incomes under $26,000 per year (in constant 2016 dollars) grew by 1.8 million between 2006 and 2016. However, the number of rental units that would be affordable to these households at 30 percent of income dropped by 500,000. New supply is clearly not coming online at these low rent levels. Moreover, not enough existing units are filtering down to counter those lost to abandonment, higher rent levels, or conversion to higher-end condominiums. This increasingly tight low-end rental market is driving up cost-burden rates for the growing numbers of low-income renter households that are forced to pay more than 30 percent of their income in rent.

Household growth is also outpacing stock growth at the high end of the rental market. Unlike for low-end units, where supply shrank, the number of units renting for $2,000 or more grew by 1.65 million between 2006 and 2016. While significant, this growth was well short of the 2.9 million increase in high-income renter households able to afford those units without paying more than 30 percent of their incomes in rent.  Without stock to match growth in numbers, both high- and low- income renters absorbed units in the middle rent categories – a less burdensome proposition for high-end renters than low-end renters. This dynamic put pressure on the middle of the market despite the apparent surplus in additional supply relative to renters at the middle levels shown in Figure 1, and helped drive demand for additional high-end rental construction.

As our interactive tool shows, while the story varied across metro areas, the situation for lowest-income renters worsened in almost all of them. The most common trend – a declining supply of low-cost units amidst growth in lowest-income renters – was found in the majority of metros. While the number of low-rent units grew in a small number of metros, such as Washington DC, the growth was slight and did not match that of low-income renter households (Figure 2). Moreover, even in a handful of metro areas where the number of low-income renters declined (such as Denver and Raleigh), declines in the low-cost rental stock in those same areas were even greater, leading to tighter conditions at the low end of the market.

Figure 2: Similar Patterns of Changes in Rental Supply and Demand Appear in Metros Across the US 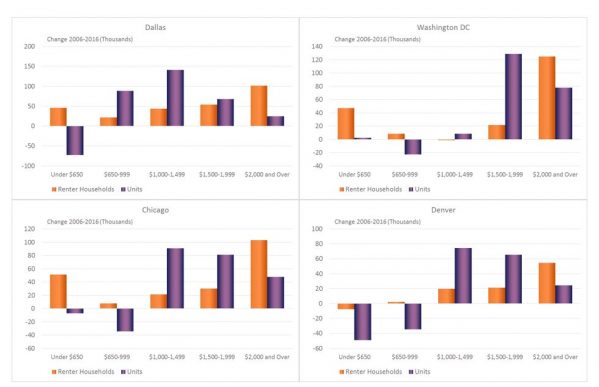 The metro-level data also show that in high-cost places like New York and Los Angeles there does not appear to be a gap between growth in high-end rentals and high-income households. This could suggest a stronger high-end multifamily development response to high-income renter growth that has added more high-end units in these metros, or it could also mean these areas had a larger shift of low- to high- rents among existing units. It appears, however, that these high-cost metros follow the same trends as other metros but our top rent category of $2,000 per month or higher is simply not high enough to proxy the highest end of the market in these metros as it does elsewhere. Indeed, when we re-define the top-end category in these metros to $3,000 per month, as shown for New York in Figure 3 below, the familiar gap seen in other metros appears. 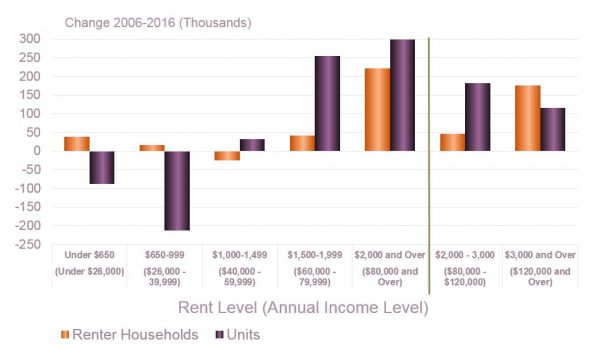 Check the interactive tool to see the trends for the 100 largest metros in the US.