Jennifer Molinsky is Project Director of the Housing an Aging Society Program and a Lecturer at the Graduate School of Design. As Project Director, Jennifer leads research exploring the housing...

In the past several years, “home sharing” among older adults has garnered increased attention, with news stories focusing on “the Golden Girls trend” and a growing number of businesses helping to screen and match people interested in shared housing.

The data, however, suggest that this is as yet a small – but growing – phenomenon. In 2016, 879,000 people age 65 or over lived with, or as, a “roomer or boarder,” “housemate or roommate,” or other non-related person according to the American Community Survey, representing 1.8 percent of all older adults. Of the older adults who share homes, 438,200 lived only with a roommate who also was age 65 or over, while nearly 370,000 lived with a younger person. An additional 71,000 people lived as a group of older adults in a household that also included a younger non-family member. In contrast, nearly 12.8 million people 65 or over lived alone and another 21.7 million lived only with their spouse or partner, while 452,000 older adults lived with only a sibling or siblings. (These figures exclude more complicated arrangements such as older couples, families, and siblings who also live with nonrelatives including roommates.)

Though the number and share of older adults living with unrelated roommates is small, both grew dramatically between 2006 and 2016. Over that time, when the older population grew from 38 to 50 million, an increase of 33 percent, the segment of the older population sharing their homes grew from 1.3 to 1.8 percent, and the number of older adults in these arrangements grew by 88 percent (from about 470,000 to nearly 988,000) (Figure 1). 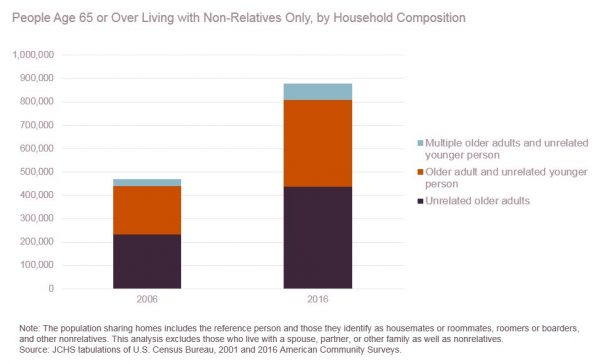 A second motivation is social. While living alone does not in itself lead to loneliness, studies have shown that living alone is a predictor of loneliness among older people. And loneliness is a risk factor for a number of health issues, including depression, cardiovascular disease, and cognitive decline. Sharing a home can bring companionship and support, as well as an increased sense of safety. A third motivation is that roommates can sometimes help with chores and maintenance, particularly in cases where younger and older people share a home.

For all these reasons, a growing number of initiatives are helping to pair older people with a roommate or long-term guest. Silvernest, which operates in parts of Colorado, California, Arizona, and Florida and is planning to expand to New York, Boston, and Seattle, has had 40,000 renters and homeowners use its screening and matching services since it began in 2015. Senior Homeshares, which operates nationally, has enrolled over 17,000 members since 2015. Nesterly, currently operating in Boston, focuses on intergenerational homesharing by connecting older people with extra space to younger people—including graduate students finding it difficult to afford the city’s high rents. Guests may exchange work around the house for lower rents. Nesterly is collaborating with Boston as part of the city’s Age-Friendly Boston Action Plan. Finally, though it wouldn’t fall in the category of house sharing, many older adults are also hosting guests short-term, through websites like Airbnb (a 2017 report notes that older adults are the fastest growing segment of the Airbnb host community in New York state).

The growth of these and other entities, as well as the combination of demographic trends and continued high housing costs, make home sharing a trend to watch. And while it may not work for every household or individual, home sharing represents an important additional housing option that can help people afford housing, find companionship, and share household tasks.