What Should We Do with the GSEs? Common-Sense Reform Recommendations for the Biden Administration 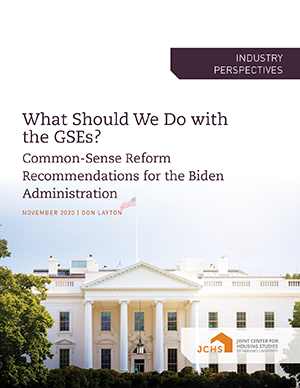 The GSE reform question, i.e. how should the government-sponsored enterprises of Fannie Mae and Freddie Mac end their conservatorships, has proven to be one of the most vexing in Washington in the past decade. They have been under government control for over twelve years now with no concrete end in sight, even though conservatorship was meant to be a temporary arrangement. The question is renowned for its complexity, the intense politics surrounding it, and the immense amount of money involved.

This paper is designed to help incoming Biden administration officials to avoid starting from scratch or pursuing paths already found to be dead ends. Don Layton concludes that the new administration, if it is to successfully address the GSE question, must follow one of two possible paths in the next twelve to twenty-four months. The first possible path is to leave the companies in long-term conservatorship – which has worked, and continues to work, unexpectedly well – and then possibly revisit the question of conservatorship exit in a few years. The second possible path is to additionally implement, via administrative means, the early years of a long-term transition to the utility model.