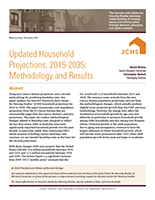 With these changes, JCHS now projects that the United States will add 13.6 million households between 2015 and 2025 and 11.5 million households between 2025 and 2035. The former figure is a significant increase from JCHS' 2013 "middle-series" estimate that the U.S. would add 12.4 households between 2015 and 2025. The increase stems entirely from the new Census Bureau population projections and not from the methodological changes, which actually produce slightly lower projected growth than the JCHS' previous methodology. However, the change does affect the distribution of household growth by age, race and ethnicity. In particular, it increases household growth among older households and also among non-Hispanic whites. Projected growth in the adult population, due to aging and immigration, continue to have the largest influence on future household growth, which will become more pronounced after 2025 when adult population growth levels peak and begin to moderate.