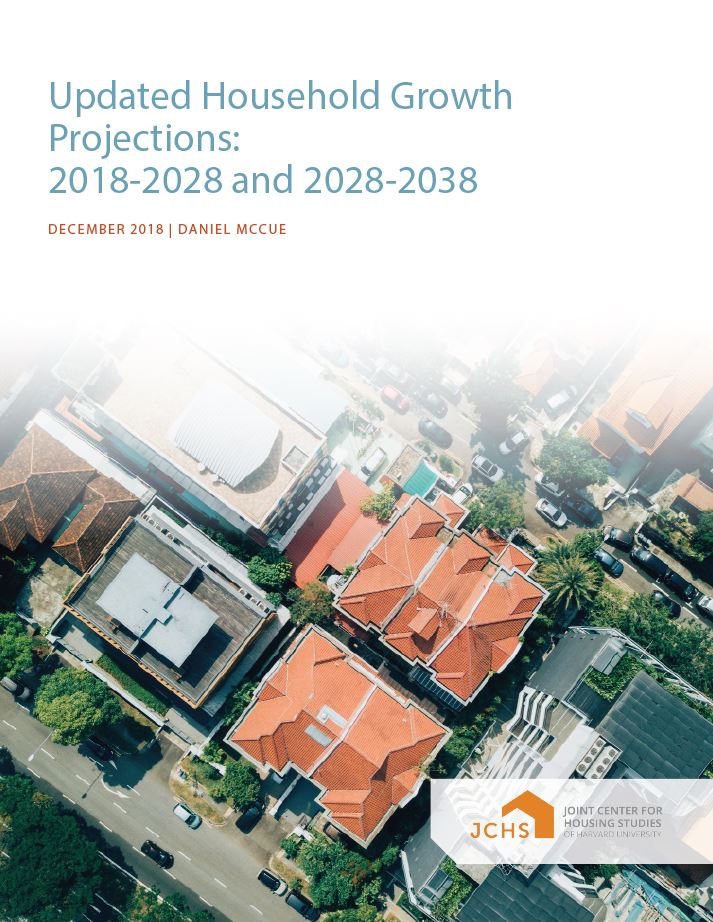 The JCHS household projections call for 12.2 million additional households formed between 2018 and 2028. This is 1.4 million lower than the 13.6 million growth projected by JCHS’s 2016 projections for the 2015-2025 time period. Based on these lower projections, total baseline demand for new housing in 2018-2028 is projected to average 15.1 million additional units per year. This new projection for 2018-2028 represents a downward revision of the 2016 projection of 16.9 million estimated baseline demand for 2015-2025, but would still exceed the rate of housing production as of 2018. After 2028, household growth is expected to decline to 9.6 million in 2028-2038 despite continued growth in the number of new household formations by young adults, which will be outweighed by the growth in losses of households among the rising number of households in the oldest age groups.

Whether these projections come to pass will depend on a variety of factors. With regard to the level of household formation, the most important factor is the rate of foreign immigration. As shown by changes since last projection, shifts in these estimates can have a large impact on household projections. The level of net immigration projected over the next ten years is actually slightly below current levels and so seems like a reasonably conservative estimate. However, given the strong steps taken by the Trump administration to curtail immigration, it remains to be seen whether there will be further declines going forward.

The other key factor affecting the household projections are trends in headship rates. The latest estimates suggest that declines in these rates among younger households have slowed, and so the assumption that rates will decline slightly over the next five years also seems conservative. But changes in economic conditions or housing affordability could further reduce the rate of household formation in the future.

With regard to estimates of future need for new housing: after household growth projections, the second most important driver of JCHS’s projections of future demand for housing is the rate at which existing housing units are replaced. The assumed net replacement rate is also near historic lows and so seems conservative – particularly in that such a rate would assume each house lasts 800 years. However, the consistent downward trend in this rate in recent years suggests that the rate could fall even further in the future. In fact, current additions to the housing stock are falling short of the needed rate given current levels of household formation. The reasons for this shortfall are not entirely clear, but suggest that some form of supply constraint may limit the market’s ability to meet demand for housing. If that shortfall persists, the expected result would be rising housing prices.