Update on Homeownership Wealth Trajectories Through the Housing Boom and Bust 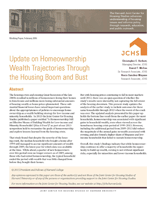 The housing crisis and ensuing Great Recession of the late 2000s resulted in millions of homeowners losing their homes to foreclosure and millions more losing substantial amounts of housing wealth as home prices plummeted. These substantial financial losses have raised important questions about the appropriateness of policies to encourage homeownership as a wealth building strategy for low-income and minority households. In 2013 the Joint Center for Housing Studies published a paper entitled "Is Homeownership Still an Effective Means of Building Wealth for Low-income and Minority Households? (Was it Ever?)" as part of our 2013 symposium held to reexamine the goals of homeownership and explore lessons learned from the housing crisis.

That study found that despite the severity of the housing crash, the median household who bought a home after 1999 still managed to accrue significant amounts of wealth through 2009, the latest year for which data was available at the time. While about a quarter of new homeowners over this period were no longer owners as of 2009, among those who had exited homeownership, the typical household ended the period with wealth that was little changed from before they bought their homes.

But with housing prices continuing to fall in most markets until 2012, there was an open question of whether the study's results were skewed by not capturing the full extent of the housing downturn. This present study updates the analysis of the earlier study to include outcomes for these same households through 2013 when the worst of the crash was over. The updated analysis presented in this paper upholds the bottom-line result from the earlier paper: for most households, homeownership was associated with significant gains in household wealth, even when viewed across the tumultuous housing crisis period of 1999-2013. However, including the additional period from 2009-2013 did reduce the magnitude of the annual gains in wealth associated with owning, and also found a higher share of Hispanic and low-income households that failed to sustain homeownership.

Overall, this study's findings indicate that while homeownership continues to offer a majority of households the opportunity to build up wealth, owning is not without significant risks, especially for minorities and lower-income households.