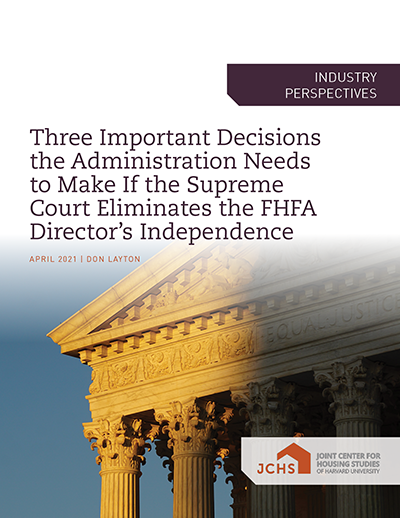 The Federal Housing Finance Agency (FHFA), the regulator of the two government-sponsored enterprises (GSEs) Freddie Mac and Fannie Mae, has also been the conservator of the two GSEs since September 2008. As the GSEs’ conservator, the FHFA has total authority over their operations – it has all the authority that would normally be held, for each GSE, by their shareholders and by their board of directors and also by their management. When the FHFA was established in mid-2008, Congress created a single position, titled “director,” to run the agency. In line with the tradition for independent regulatory bodies, that director, once nominated by the president and confirmed by the Senate, has a fixed term (in this case for five years), and can be dismissed by the President only for “cause.”  This one individual therefore has unprecedented and almost unaccountable power over the GSEs and, through them, over the country’s housing finance system.

There is a lawsuit now before the US Supreme Court (Collins v. Mnuchin) that addresses the issue of the independence of the FHFA director. In a similar case last year, concerning the same issue about the Consumer Finance Protection Bureau (CFPB), the court ruled that it was indeed unconstitutional for a single director to have the protection of independence in that manner. While the situations at the two financial regulatory agencies are not exactly the same, the predominant expectation in the housing finance industry and policy community is that the Supreme Court ruling will reach the same conclusion for the FHFA as it did for the CFPB. The ability of the president to fire at will the head of the FHFA, while sounding limited in scope, would in practical terms deprive the FHFA in its entirety, including all its activities, of its independence; as much as any cabinet department, the FHFA would come under the direct control of the White House. Don Layton suggests that the Biden administration, if this all comes to pass, has three important decisions to make that could be very consequential, for better or worse, in their impact on housing finance. First is a major policy decision: how much of the independence lost via the Supreme Court decision should the administration, by policy, cede back to the FHFA, as the White House need not keep it all? Second and third are two related personnel decisions: whom should the administration appoint as the acting director of the FHFA, and whom should it nominate for Senate confirmation as the permanent director?