To Preserve Affordable Housing in the United States: A Policy History 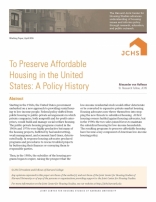 Starting in the 1960s, the United States government embarked on a new approach to providing rental housing to low-income people. Federal policy shifted from public housing to public-private arrangements in which private companies, both nonprofit and for-profit enterprises, would build and manage social welfare housing. The public-private housing programs created in the 1960s and 1970s were highly productive but many of the housing projects, buffeted by bad underwriting, weak management, and economic hard times, deteriorated badly. In response housing advocates produced programs and procedures to rescue troubled projects by buttressing their finances or conveying them to responsible parties.

Then, in the 1980s, the subsidies of the housing programs began to expire, raising the prospect that the low-income residential stock would either deteriorate or be converted to expensive private-market housing. Housing advocates now threw themselves into stopping the new threats to subsidized housing. At first housing owners battled against housing advocates, but in the 1990s the two sides joined forces to maintain the subsidized housing for low-income households. The resulting programs to preserve affordable housing have become a key component of American low-income housing policy.