A PATHWAY TO PRESERVATION? PLANNING PROCESSES AT THE INTERSECTION OF CLIMATE CHANGE AND AFFORDABLE HOUSING IN PHILADELPHIA, PENNSYLVANIA 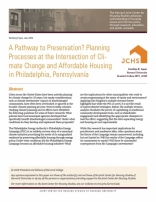 Cities across the United States have been actively planning for climate change for 20 years, but equity considerations, such as climate investments' impact on disadvantaged communities, have often been overlooked or ignored in the broader climate planning process. Most recently, scholars studying climate planning and its effects have identified the following questions for areas of future research: What policies have local municipal agencies developed that specifically benefit disadvantaged communities? Under what conditions do they develop and implement these proposals?

The Philadelphia Energy Authority's Philadelphia Energy Campaign (PEC) is an unlikely success story of a municipal climate initiative prioritizing the needs of its marginalized residents by preserving affordable housing through energy policy. Under what conditions did the Philadelphia Energy Campaign become an affordable housing initiative? What are the implications for other municipalities who wish to create programming at the nexus of equity and environment? Applying John Kingdon's multiple streams theory highlights that while PEC is novel, it is not the result of unprecendented strategies. Rather, the multiple streams analysis elucidates the power of capitalizing on traditional community development tools, such as stakeholder engagement and identifying the appropriate champion to lead the effort, suggesting that the silos separating energy and housing are not impermeable.

While this research has important implications for practitioners and academics alike, other questions about the future of the Campaign remain unanswered, including, but not limited to: Will the results of the Campaign reflect its commitment to equity? Will there by unintended consequences from the Campaign's investments?