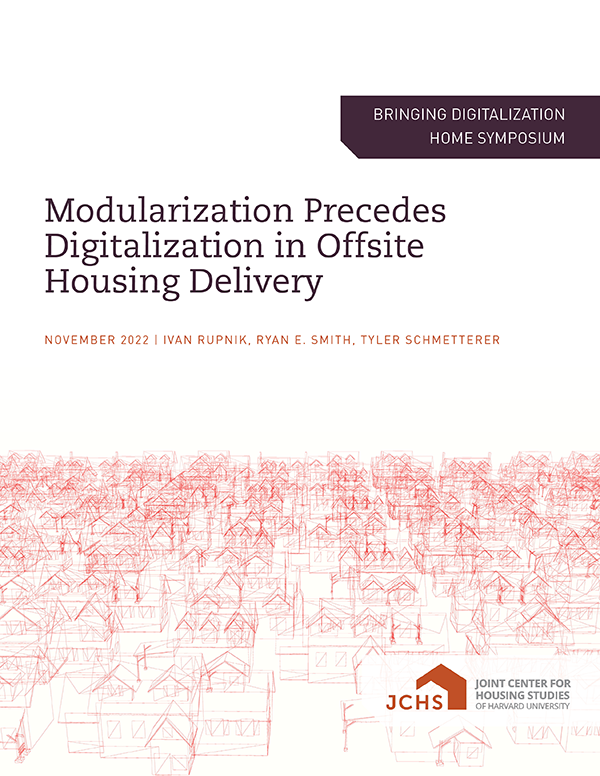 For much of the twentieth century, architects, builders, developers, economists, and policymakers have pursued the “dream of the factory-made house”. The hope was that the progressive industrialization of housing would result in a similar combination of quality, speed, and economy that historically revolutionized many other industries, including agriculture and manufacturing. Digitalization tools—including Computer-Aided Design and Drafting (CADD), Computer-Aided Design and Computer-Aided Manufacturing (CAD/CAM) and Building Information Modeling (BIM)—regularly introduced to support the architecture, engineering, and construction (AEC) industry over the past sixty years have become widely available. Despite these efforts to create a regulatory framework more amenable to offsite construction and the continued development of hardware and software technologies for the construction sector, labor productivity has continued to decrease and the cost of construction of housing has increased.

MOD X has developed a conceptual model that nests digitalization and technology within three other frames—the contextual frame (i.e., market, material, labor, regulations, and culture), the business platform frame (value creation, supply chain, and integration), and the product platform frame (modularization, product platforms, assemblies, and continual improvement). Allocating capital-intensive investments in digitalization and technology without first fully considering and addressing these contextual frames severely diminishes the potential of digital tools and techniques to deliver on the promise of housing affordability and accessibility. All the nested frames are key to improving the productivity of construction and the quality and affordability of housing; however, the third frame of product platforms is closest in proximity to digitalization and technology and can ensure the maximum impact of capital investment.

This paper was presented as part of “Panel 1: How Is Digitalization Changing How Housing Is Designed & Built?” at the symposium Bringing Digitalization Home: How Can Technology Address Housing Challenges?, hosted by the Harvard Joint Center for Housing Studies in March 2022.