A Missing Piece of the Administrative Reform Puzzle: How the GSEs Generate Cross-Subsidies 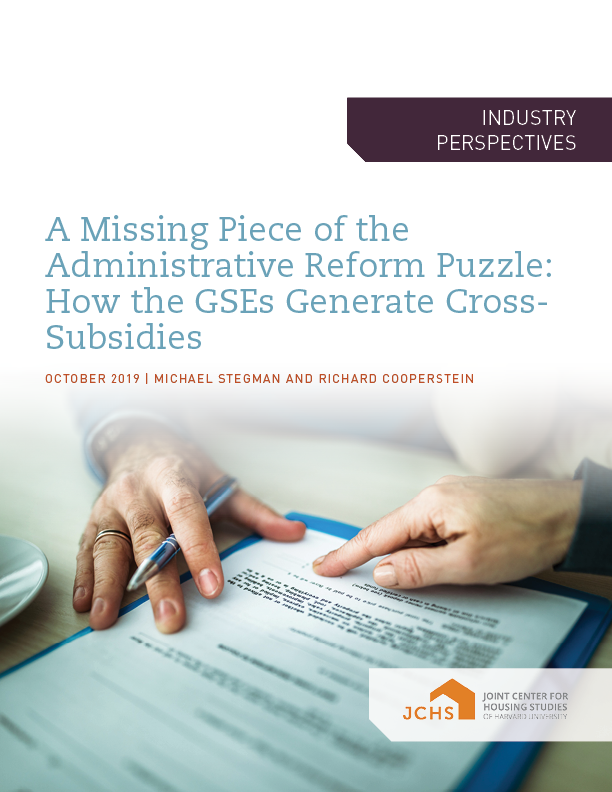 With the passing of the eleventh anniversary of GSE conservatorship and the release of the administration’s long-awaited housing finance reform plans, longstanding disagreements over the appropriate affordable housing obligations of Fannie Mae and Freddie Mac show no sign of abatement. Given that prospects for legislative reform are bleak, stakeholders have turned their collective attention to administrative reform, wondering what action Mark Calabria, the director of the FHFA, will take.

In this paper, Michael Stegman and Richard Cooperstein examine the specifics of what they consider to be one of Director Calabria’s most delicate challenges: how to achieve his and the administration’s shared philosophically based goal of reducing the GSEs’ outsized role in mortgage finance. Over the years, the GSEs, in collaboration with FHFA, have adopted a complex, opaque set of modified loan level risk-based prices that are interwoven into the product mix. The authors argue that the FHFA must resist the temptation to take the easy way out by lopping off cash-out refi and investor loans from the GSEs’ menu of products, lest such changes drastically undermine their middle class mission and their ability to fulfill their affordable housing obligations.