The Homeownership Rate and Housing Finance Policy – Part 2: The Heavy Lift to Break the 65 Percent Barrier 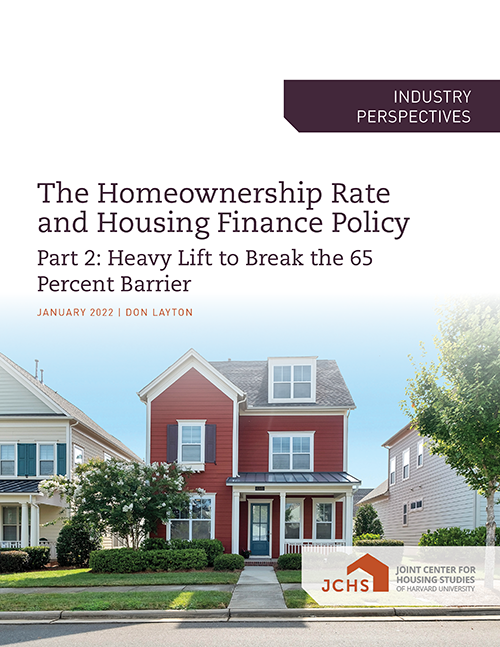 The homeownership rate is broadly regarded by policymakers as a core measure of how well the US socioeconomic system is delivering a good quality of life for the typical American family. As described in “The Homeownership Rate and Housing Finance Policy – Part 1: Learning from the Rate’s History,” the benefits of homeownership are substantial. Consequently, public policy in housing has long had an objective to sustainably increase the homeownership rate. Unfortunately, efforts in the last five decades to do just that have simply failed as the rate is the same today as it was back in the late 1960s, i.e. about 65 percent. As a result, millions more families who could have enjoyed the benefits of an increased homeownership rate have missed out. The purpose of this article is to lay out several key policies that, if well-implemented, could finally accomplish just such an increase, a challenge unfortunately made much harder by pandemic distortions that have dramatically raised the price of homes nationwide.

Facing the high historical stickiness of the homeownership rate, Don Layton describes three initiatives designed to increase it; each is about a well-targeted and sizeable subsidy, plain and simple. There are already existing very large and long-established subsidies to homeownership, and so two of the three initiatives are about strongly re-targeting these subsidies towards first-time homebuyers, rather than just broadly supporting homeownership: (1) the mortgage interest deduction for federal income tax payments, and (2) the interest rate cross-subsidies of the two GSEs. The third initiative is to create a new subsidy in the form of a well-constructed and highly targeted downpayment assistance program in line with that proposed by the recent Biden presidential campaign. Together, these subsidies can significantly reduce the downpayment and monthly interest cost for a typical targeted beneficiary.