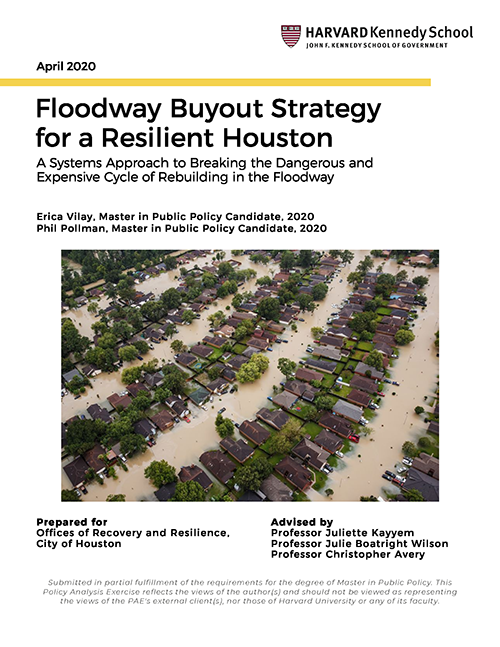 Houston, Texas, America’s most diverse and fourth-largest city, is the most flooded city in the United States. Houston’s geography and urban planning make flooding and water damage a constant threat. Houston is also the largest city in the US without a zoning ordinance code, though it does have land-use restrictions. The structures, policies, and tactics of disaster recovery today are not preparing the City of Houston for the increasingly costly events of tomorrow.

In February 2020, the Houston Mayor’s Office of Resilience published “Resilient Houston,” a long-term resilience plan for adapting to the effects of shocks and stressors, including climate change and extreme weather events. To achieve healthy and connected bayous, an integral part of Houston’s resilience, the plan aims to clear the floodway of all habitable structures by 2030. An effective buyout program, in which the government purchases property from private citizens, is the only way to break the cycle of destruction and rebuilding. Buyouts in the floodway have many compelling benefits, most importantly permanently relocating families to safer, less flood-prone areas. However, adding to the complexity and perhaps fueling distrust of the government, the US and Houston have a history of using relocation and development to displace and consolidate non-white communities.

This paper argues that Houston must move from an opportunistic buyout program happening at multiple agencies to an integrated and scaled-up “buy-in/buyout” program that includes a relocation strategy at the forefront. The buy-in/buyout process means including community participation in and endorsement of relocation plans. Strategic and managed retreat therefore becomes not only a flood reduction response, but also a tool for achieving Houston’s larger social, economic, and resilience goals. Our thirteen recommendations build upon the City’s current competencies to help the City of Houston meet its 2030 goal of clearing the floodway of all habitable structures, with each recommendation supported by case studies from around the US.