The FHFA’s Report on Credit Risk Transfer: Another Controversial Document Further Erodes Confidence in the Agency 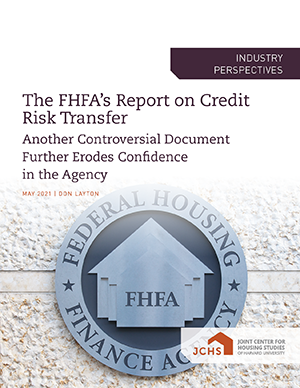 The Federal Housing Finance Agency (FHFA), the regulator and conservator of Freddie Mac and Fannie Mae, the two government-sponsored enterprises (GSEs), earlier in May released a report titled “Performance of Fannie Mae’s and Freddie Mac’s Single-Family Credit Risk Transfer.” Don Layton argues that the CRT Report is meaningful in two distinct ways. First, that it is a classic Washington-style advocacy document, starting with the predetermined conclusion that “CRT doesn’t work.” Secondly, he notes that this report is the fourth in a string of recently released major FHFA documents that have been driven by a free-market advocacy viewpoint that the GSEs should be shrunk if not eliminated altogether. This viewpoint puts these reports outside the mainstream of views held in the housing finance industry and broader policy community. As a result, Layton argues, these communities’ confidence in the FHFA as a proper and impartial regulator has taken multiple hits. The CRT Report thus leaves little doubt that the FHFA now operates with a level of advocacy and lack of even-handedness that put it outside the bounds of normal regulator behavior.