The State of the Nation's Housing 2013 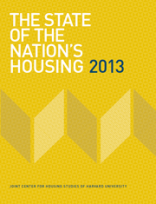 The long-awaited housing recovery finally took hold in 2012, heralded by rising home prices and further rental market tightening. While still at historically low levels, housing construction also turned the corner, giving the economy a much-needed boost. But even as the most glaring problems recede, millions of homeowners are delinquent on their mortgages or owe more than their homes are worth. Worse still, the number of households with severe housing cost burdens has set a new record.

Blogs & Responses to the Report