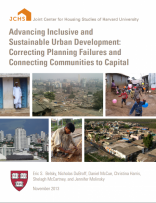 Tackling urban poverty and attending to its spatial manifestations is vitally important to national economic and social development. From a low of an estimated 28 percent of the population in Latin America to a high of 76 percent in South Asia, the urban poor constitute both an enormous challenge and an opportunity. The speed with which many regions of the world are urbanizing, the haphazard spatial development of urban areas, and the deplorable conditions under which more than 800 million slum dwellers live make the need to address urban poverty more urgent than ever. At the same time, government and business leaders are awakening to the potential to advance social and economic development by engaging the urban poor as consumers, producers, asset-builders, and entrepreneurs.

This report outlines key deficiencies in how developing countries conduct their urban planning. Often, national governments establish regional authorities or public-private partnerships to plan major investments in urban infrastructure. These authorities and partnerships, however, often do not adequately consider broader regional land use planning goals, community input, or the needs of poor communities. Local land use regulations and plans, to the extent that they exist at all, are not widely followed. Plans for slums seldom situate them in the context of broader plans for the urban region. And the non-governmental organizations that do much of the work to improve slums seldom coordinate their efforts. Community-based organizations often are weak and not incorporated into the government’s urban planning process. In addition, these governments, authorities, and partnerships generally fail to formulate specific strategies to improve or redevelop slums in ways that leave the poor better off. The result of these deficiencies is urban growth that is largely unplanned and uncoordinated.