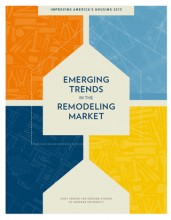 CAMBRIDGE, MA – In the aftermath of the Great Recession, the U.S. home improvement industry has fared much better than the broader housing market, according to a new report from the Joint Center for Housing Studies of Harvard University. Emerging Trends in the Remodeling Market is the latest biennial report in the Improving America’s Housing series published by the Remodeling Futures Program at the Joint Center. While residential construction is many years away from a full recovery, the home improvement industry could post record-level spending in 2015.

A number of factors have contributed to the strengthening remodeling market: following the housing bust, many households that might have traded up to more desirable homes decided instead to improve their current homes; federal and state stimulus programs encouraged energy-efficient upgrades; and many rental property owners, responding to a surge in demand, reinvested in their properties to attract new tenants.

Additionally, with the economy strengthening and house prices recovering, spending on discretionary home improvements (remodels and additions that improve homeowner lifestyles but which can be deferred when economic conditions are uncertain) rose by almost $6 billion between 2011 and 2013, the first increase since 2007.

Improvement spending, however, has not been evenly distributed across the country. Homeowners in the nation’s top 50 remodeling markets accounted for a disproportionately large share—nearly 60 percent—of overall improvement spending. Thanks primarily to their higher incomes and home values, owners in metro areas spent 50 percent more on improvement projects on average than their nonmetro counterparts in 2013 (see interactive map).

The remodeling industry also faces a radically different landscape than before the recession. “After years of declining revenue and high failure rates, the home improvement industry is, to some extent, reinventing itself,” says Kermit Baker, director of the Remodeling Futures Program at the Joint Center. “The industry is finding new ways to address emerging growth markets and rebuild its workforce to better serve an evolving customer base.”

Millennials, however, are the key to the remodeling outlook. “The millennials’ increasing presence in the rental market has already helped to lift improvement spending in that segment,” says Chris Herbert, managing director of the Joint Center. “It’s only a matter of time before this generation becomes more active in the housing market, supporting stronger growth in home improvement spending for decades to come.”