Soaring Home Prices, Tight Supply, and Millions Face Risk of Eviction or Foreclosure: The State of the Nation’s Housing 2021 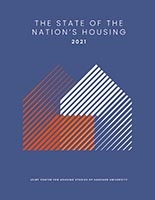 CAMBRIDGE, MA – As the US economy continues to recover from the effects of the pandemic, households that weathered the crisis without financial distress are snapping up the limited supply of homes for sale, pushing up prices and further excluding less affluent buyers from homeownership. At the same time, millions who lost income are behind on housing payments and on the brink of eviction or foreclosure. According to The State of the Nation’s Housing 2021, a new report released today by the Harvard Joint Center for Housing Studies, a disproportionately large share of at-risk households are those with low incomes and people of color. While policymakers have taken bold steps to prop up consumers and the economy, additional government support will be necessary to ensure that all households benefit from the expanding economy.

Home Sales at Highest Level Since 2006

Even before the pandemic, household growth in the suburbs and small metros was on the rise. The pandemic helped accelerate this growth, particularly among younger households who were ready to own homes, and were looking for more space to work remotely. In 2020, existing home sales rose 6 percent and new single-family home sales jumped 20 percent, putting total home sales at their highest level since 2006. The homebuying binge occurred despite historically tight supply; in late 2020, months of supply for existing homes dipped below 2 months for the first time ever, while median time on the market hit a record low of 18 days.

With Prices Skyrocketing, Is a Bubble Emerging? 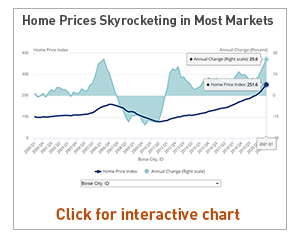 The combination of robust demand and limited supply lifted home prices to their fastest pace in over a decade. The largest price gains were in rapidly growing Western states, led by a 28 percent jump in Boise and 22–23 percent increases in Austin and Tacoma. [Interactive chart] Additionally, home price gains continued to outrun income growth last year, lifting the national price-to-income ratio to its highest level since 2006.  “These outsized increases have raised concerns that a home price bubble is emerging,” says Daniel McCue, a Senior Research Associate at the Harvard Joint Center for Housing Studies. “But conditions today are quite different from the early 2000s, particularly in terms of credit availability. The current climb in prices instead reflects strong demand amid tight supply, aided by record-low interest rates.”

Although the national homeownership rate remains on an upward trajectory, disparities between households of color and white households remain substantial. In the first quarter of 2021, the Black-white homeownership gap stood at 28.1 percentage points, an improvement from the record high of 30.8 percentage points in 2019 but still large by historical standards. Income inequality contributes to the disparities in homeownership, with the median income of white households ($71,000) some 65 percent higher than Black households ($43,000) and nearly 30 percent higher than Hispanic ($55,000) households. Accumulating the savings needed for downpayment and closing costs is difficult for most first-time buyers, but especially for renter households of color. 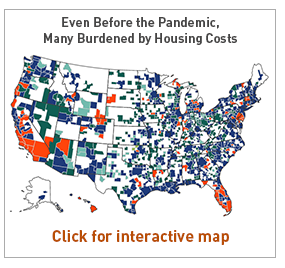 Housing affordability remains an acute challenge for lowest-income renters: more than 80 percent of renters earning less than $25,000 were cost burdened in 2019 (spending over 30 percent of their income for housing) and the majority spent more than half their income on housing. And while housing subsidies offer much-needed support, only a quarter of eligible households receive assistance. “Housing cost burdens have also moved up the income ladder,” says Alexander Hermann, a Senior Research Analyst at the Center. “Seventy percent of renter households earning between $25,000 and $34,999 and nearly 50 percent of renters earning between $35,000 and $49,999 were cost burdened in 2019.” [Interactive map]

As a result of widespread income losses during the pandemic, 14 percent of all renter households were behind on their housing payments in early 2021, and in ten states, more than one-fifth of renters were in arrears. [Interactive map] Racial disparities are evident here as well, with 29 percent of Black, 21 percent of Hispanic, and 18 percent of Asian renters in arrears, compared with just 11 percent of white renters. [Interactive chart] With so many renters in financial distress, there are concerns about an impending wave of evictions. So far, substantial federal relief, along with federal and state eviction moratoriums, have prevented large-scale displacement. However, if the federal moratorium ends in July, staving off a substantial increase in evictions and homelessness will depend on whether the latest round of assistance reaches at-risk households in time.

Homeowners facing hardship have also received support in the form of loan forbearance and a ban on foreclosures. This protection, allowing borrowers to defer or reduce their payments for up to 18 months, was extended to the 70 percent of homeowners with federally backed loans. As of March 2021, a majority of the 7.1 million loans that had entered forbearance had left that status, but the outcomes are uncertain for the 2.3 million borrowers who have yet to resume their mortgage payments. And for many households that had to tap savings or go into debt to cover lost income last year, the impacts of the pandemic will linger well into the future. Recovering from the devastating effects of the pandemic will be harder yet for those who have lost loved ones to COVID-19 or are themselves suffering from the long-term debilitating effects of the virus.

Policymakers Need to Keep Those At-Risk from Falling Further Behind

The unprecedented events of 2020 both exposed and amplified the impacts of unequal access to decent, affordable housing. “For those households with secure employment and good-quality housing, their homes provided a safe haven from the pandemic,” says Chris Herbert, Managing Director of the Center. “But for millions struggling to cover the rent or mortgage, their housing situations have become increasingly insecure and these disparities are likely to persist even as the economy recovers, with many lower-income households slow to regain their financial footing.” Policymakers must be attuned to the needs of those who have fallen even further behind, ensuring that they also benefit from the expanding economy.

The State of the Nation's Housing 2021 will be released in a live webcast today at 4:00 pm ET, featuring

Register to attend and join the conversation on Twitter with #harvardhousingreport