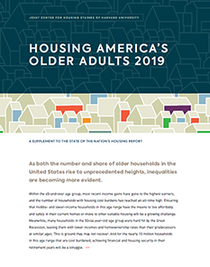 CAMBRIDGE, MA – Housing inequality is becoming increasingly evident among older Americans as the number of older households climbs to unprecedented levels, according to Housing America’s Older Adults 2019, a new report released today by the Harvard Joint Center for Housing Studies.

Between 2012 and 2017, the number of households headed by someone 65 or older jumped from 27 million to 31 million and will continue to grow. At the same time, the number of older adults facing housing cost burdens reached an all-time high of 10 million [Interactive Map], income disparities are widening, and white-minority gaps in homeownership have expanded. Meanwhile, homeownership rates are lower and debt rates are higher for those 50 to 64, as compared to earlier generations.

The new Housing America’s Older Adults 2019 report, which supplements the Center’s annual State of the Nation’s Housing report, shows lower-income households falling further behind their higher-earning peers in income growth [Interactive Chart]. Between 2012 to 2017, the incomes of households age 65 and over in the top 10 percent increased by 22 percent while incomes of those in the bottom 10 percent fell by 4 percent. Additionally, the median income for the highest earners between the ages of 50 and 64 set a new record of nearly $204,000 in 2017, while the median income for the lowest earners, $14,400, was lower than the 2000 level of $17,100.

“The falloff in homeownership rates among those approaching retirement, and the elevated levels of mortgage debt among those who do own, is concerning,” says Chris Herbert, Managing Director of the Joint Center for Housing Studies. “And there are significant differences in owners and renters when it comes to preparedness for retirement.”

Indeed, homeowners have far greater net wealth than renters: in 2016, the median homeowner age 65 and over had a net worth of $319,200, compared to the same-age renter whose net worth was just $6,700. Additionally, owners who have paid off their mortgage have lower housing costs, at a monthly median of $458, compared to renters’ monthly cost of $830.

The report also highlights the widening racial/ethnic disparities in homeownership: last year, the black-white homeownership gap among households age 65 and over was at a 30-year high of 19.4 percent while the Hispanic-white gap stood at 18.4 percent.

Given these growing affordability challenges, combined with low rates of housing accessibility and a lack of services in the areas where many older Americans live, the report highlights several serious issues facing the country with respect to housing its increasing older adult population. “Addressing these issues will require concerted action at all levels of government,” says Jennifer Molinsky, a Senior Research Associate at the Center and lead author of the report. “This is especially true as the leading edge of the baby boomers reaches their 80s in the next decade and the need for affordable and accessible housing increases.”

“Commitments to create age-friendly communities and some recent funding for affordable housing construction for older adults are promising starts,” says Herbert. “But the time for innovation—in the design, finance, construction, and regulation of housing—is now. The quality of life and well-being of over a quarter of the US population will depend on it.”