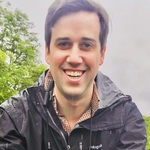 Andrew Gibbs was a research assistant at the Center in 2021. His research is focused on the intersection of affordable housing policy and real estate capital markets. He holds a Master in Design...

What Can We Expect from Cambridge’s New Affordable Housing Overlay?

The City of Cambridge gained national attention in October 2020, when the City Council passed the 100 Percent Affordable Housing Overlay (AHO) ordinance. New analysis from the Center estimates that this ordinance could reduce affordable housing development costs by 10 to 15 percent per leasable square foot. Given the current gap between market rents and affordable rents in Cambridge, this reduction is insufficient to attract non-subsidized capital to build affordable housing. However, at a minimum, the AHO should help increase affordable development capacity, allowing developers to stretch subsidies over more units and better compete on land acquisitions.

The AHO is designed to reduce the barriers to affordable development by permitting larger, “as-of-right” new affordable housing. A key provision of this mandate requires that at least 80 percent of rental dwellings (or 50 percent of for-sale dwelling units) are dedicated to households making up to 80 percent of Area Median Income (AMI). The remaining units are limited to households making up to 100 percent AMI. Buildings built under the AHO are also allowed to be one-to-two stories taller, denser, and are subject to less stringent requirements related to parking, open space, and lot coverage.

The AHO gives property owners the “as-of-right” ability to develop affordable housing in Cambridge, meaning that the city must approve projects that meet the law’s detailed guidelines on design, income eligibility, and community process requirements. By giving affordable housing developers certainty about both the minimum number of units that will be allowed and the length of the community review process, the AHO will reduce execution risks and give lenders more confidence to provide land acquisition and pre-construction loans.

As shown in the map below, the vast majority of Cambridge’s land parcels are in zoning districts where buildings cannot be taller than 35 to 40 feet (typically three stories). In these areas, the AHO permits property owners to build up to 45 feet if the building is entirely residential and 50 feet if the first floor is active non-residential use such as retail space (capped at four stories). This implies that buildable floor areas could increase by 33 percent (one extra story) in neighborhoods where existing height restrictions limit buildings to three stories. 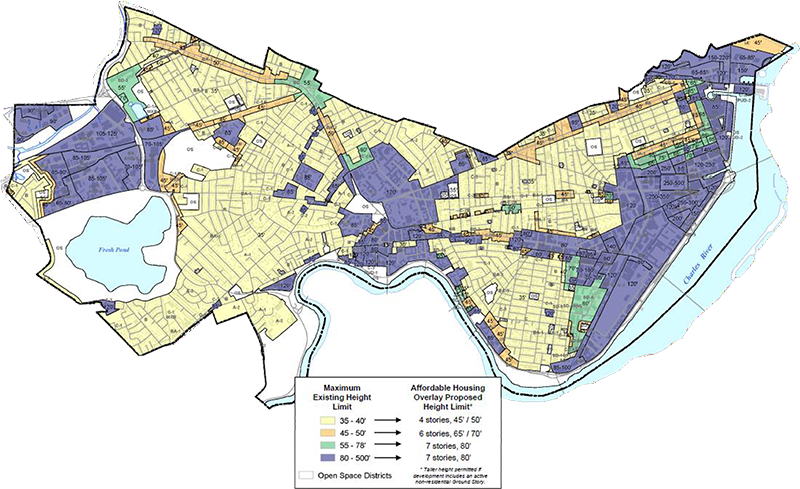 Given that the overwhelming majority of Cambridge is currently zoned at a maximum of 35 to 40 feet, the AHO’s height bonus should yield an average floor area bonus of just over 30 percent. The economic implications of this are that land costs per leasable square foot should be reduced by 25 percent on average. Assuming land costs represent 20 percent of total development costs, this would imply that the height bonus can reduce total costs per leasable foot by roughly 5 percent.

The AHO removes off-street parking requirements, unless needed to conform to other laws, codes, or regulations. Typically, existing zoning in Cambridge requires one parking space per unit. Most developers, however, have been successful at obtaining variances to lower this standard. This is significant because parking can be expensive to build as space restrictions typically require parking to be underground. In 2020, according to a WGI study, the median cost of above-ground podium parking in metro Boston was $25,752 per space. Sub-ground decks, which are usually required given space limitations (and open space requirements), can cost more than triple this amount, particularly if they are for smaller projects. Depending on the site size, eliminating the off-street parking requirement has the potential to reduce total cost per square foot by roughly 5 percent.

The AHO removed the minimum lot area per dwelling unit for AHO projects. This gives developers more flexibility in building more units (if they are smaller) and removes the per-acre density cap. However, these loosened measures may be curtailed by minimum bedroom counts since public subsidy programs for affordable housing generally favor projects with more family-sized units. Minimum front-yard, side-yard, and rear-yard setback requirements have also been reduced, which allows developers to increase building footprints.

The extent of this impact can be tough to quantify, given that it depends on the location, size of the lot, and potential building envelope. Using lots located in zoning district Res A-1 as an example at the most favorable end of the spectrum, the AHO’s side-yard and front-yard requirements could add up to another 15 feet of buildable depth (10 feet in the front and 5 feet in the rear) and 15 feet of width (7.5 feet on each side). In this extreme case, these measures could increase the potential buildable areas by another 50 percent, reducing land cost per leasable area by another 5 to 10 percent. In practice, these revised minimum setbacks will only increase potential building footprints in Districts A-1 and A-2, where the current setbacks are in excess of the new AHO minimums. Moreover, given minimum open space requirements (i.e., at least 30 percent of lot area needs to be open space), it is unlikely that these loosened setback requirements will be utilized as much as the density bonus.

As intended, while affordable housing subsidies are still required to make AHO projects economically feasible, the AHO’s “as-of-right,” height, and other provisions should help affordable developers make competitive offers for developable land in Cambridge. Quantifying the full impact of the AHO ordinance is challenging because the density bonus and loosened setback requirements will impact each parcel in different ways. Based on the AHO’s bonus densities, however, the ordinance has the potential to reduce total affordable housing development costs by 10 to 15 percent, and even more in some cases. With pandemic-induced supply chain shortages driving up construction costs, these reductions could be material.

In short, the AHO will not solve Cambridge’s affordable housing shortage given that affordable development still requires unsubsidized capital. However, the AHO has the potential to add a material number of new affordable homes and set a new industry standard for cities using comprehensive zoning tools alleviate affordability burdens.