Census data released last month show that after years of stagnation, construction of smaller homes grew appreciably in 2016. New completions for homes under 1,800 square feet increased nearly 20 percent in 2016 to 163,000 units, the first significant growth since 2004 and the largest rise since the data series began in 1999.

This growth is significant because many first-time and lower-income homebuyers hope to purchase smaller homes, which are generally less expensive than larger ones. Moreover, historically-low levels of home construction over the last decade have led to declining inventories, decreasing vacancy rates, and increasing prices, as discussed in our latest State of the Nation’s Housing report (Figure 1). 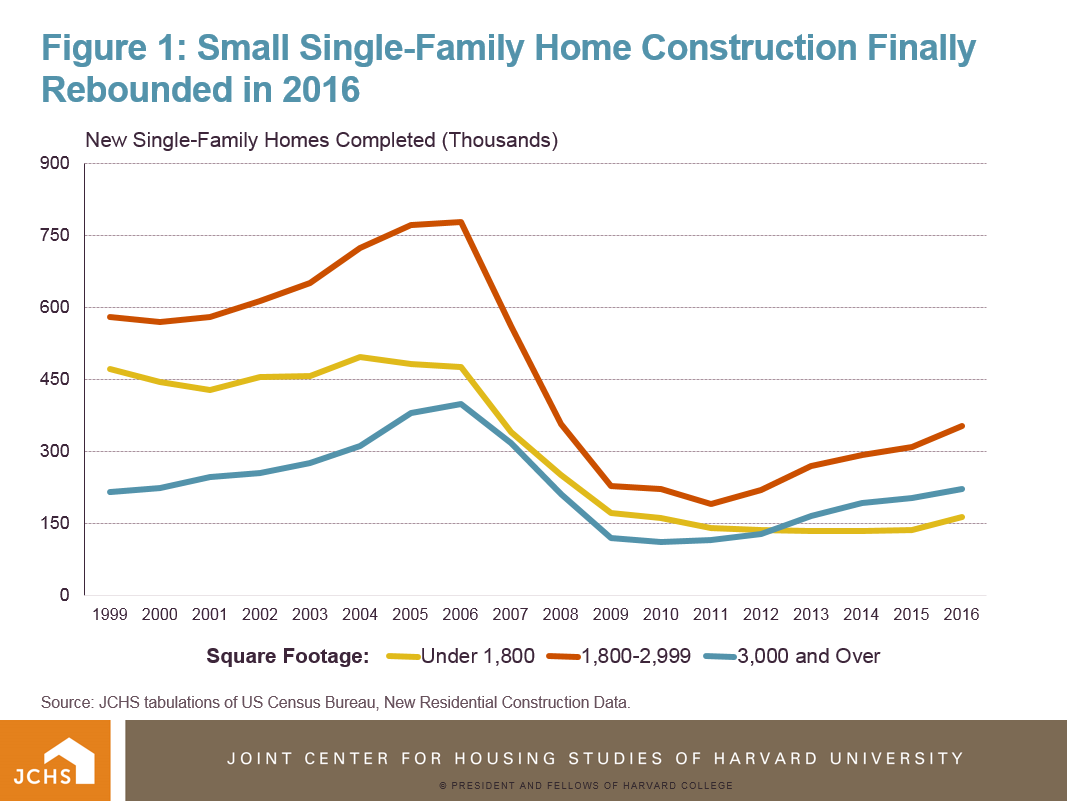 Even with the uptick in 2016, though, small-home construction remains 65 percent below the 464,000 units completed annually between 1999 and 2006, and comprises a much smaller share of newly-built housing than in the past. In 2016, small homes were 22 percent of single-family completions, well below their 37 percent market-share in 1999. In contrast, the share of large homes built grew from 17 percent in 1999 to 30 percent in 2016, while moderately-sized homes, which have consistently been the largest share of the market, have annually been 43-to-48 percent of all new single-family homes.

Construction of condos and townhouses, possible alternatives to smaller single-family housing, also remains low. Builders of multifamily properties continue to focus on the rental market where demand remains strong. Consequently, only 28,000 condos were started in 2016, a modest increase from the 26,000 starts in 2015 but much lower than the 53,000 starts averaged annually in the 1990s (Figure 2). Similarly, townhouse starts grew from 86,000 units in 2015 to 98,000 units in 2016. While this is more than double the number of starts from 2009 and comparable to the 95,000 units started annually in the 1990s, it is less than half the number started in 2005. 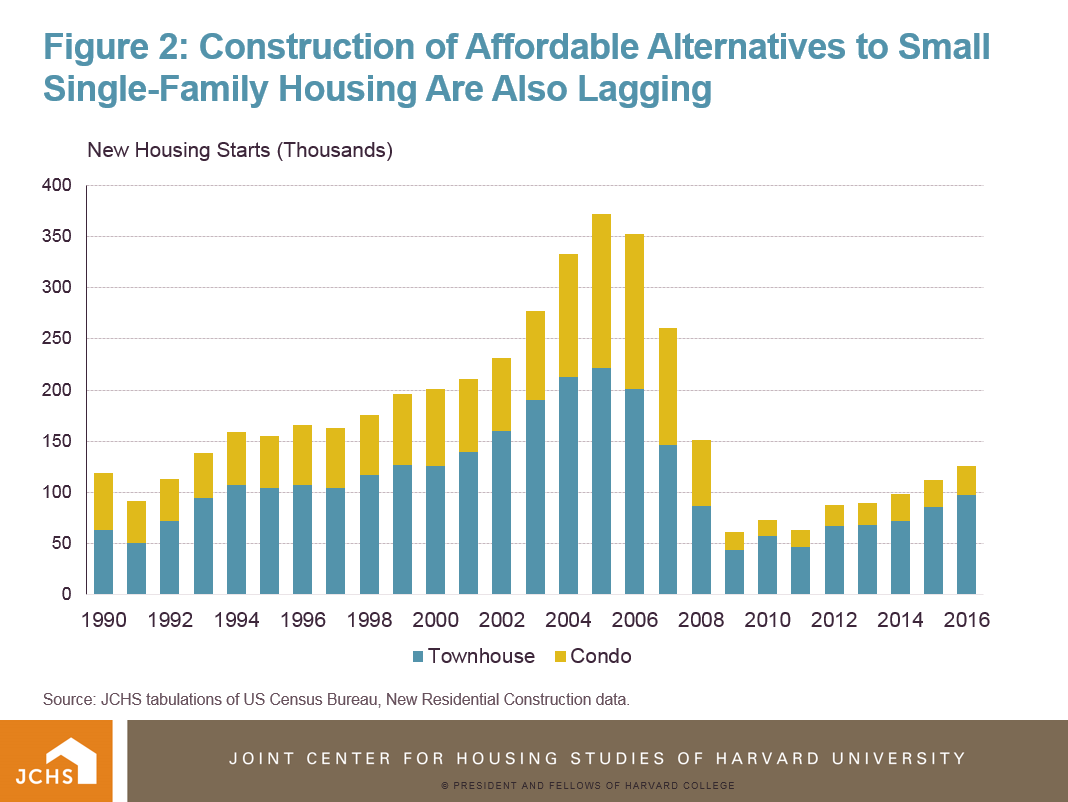 The low levels of new construction have resulted in historically-low housing inventories, especially entry-level housing. According to data from CoreLogic, the supply of modestly-priced homes – those selling for 75-to-100 percent of the area’s median list price – was below three months at the end of 2016, about half of the six months that generally represents a balanced market (Figure 3). Indeed, according to data compiled by Zillow, only a quarter of the homes for sale at the end of last year were in the bottom one-third of area homes by price, while half were in the top one-third. 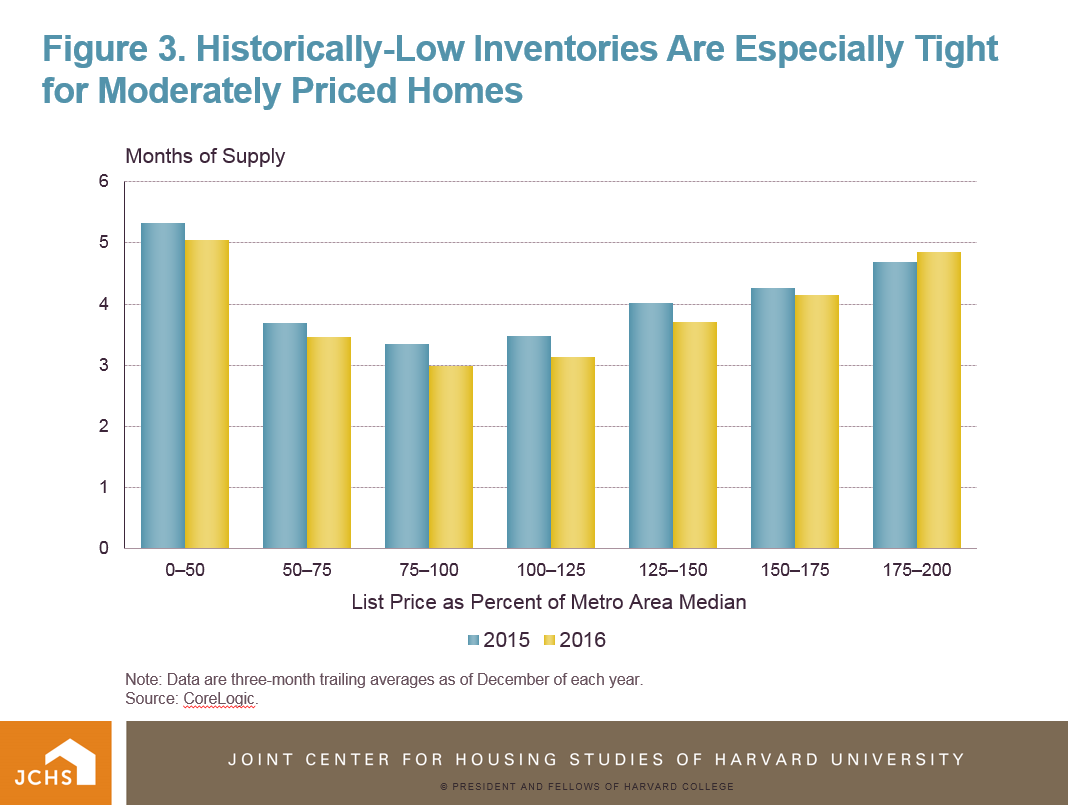 Increased demand for entry-level housing and the corresponding uptick in smaller housing construction have already contributed to the growing number of first-time homebuyers in 2016. According to the National Association of Realtors, first-time homebuyers comprised 35 percent of home sales in 2016, up from 32 percent in 2015 but still below long-term historical rates, which are close to 40 percent of all buyers. Looking forward, increases in the supply of smaller homes, townhouses, and possibly condos could help address the growing demand for lower priced homes for first-time and low-income homebuyers.