David Luberoff is Deputy Director, responsible for external relations, institutional advancement, and educational outreach at the Center. He has also been a Lecturer on Sociology at Harvard University...

While gentrification has been occurring in Seattle for several decades, the racial and ethnic composition of its gentrifying areas has changed in significant ways, according a recent article in City and Community by Jackelyn Hwang, a former Meyer Doctoral Fellow who is now an Assistant Professor of Sociology at Stanford University.

While the “the popular image of gentrification is one in which White gentrifiers establish residence in minority, particularly African American, neighborhoods,” the findings for the earlier period in Seattle are consistent with much of the existing scholarship on gentrification, which shows how gentrifiers generally avoided these neighborhoods. Even so, Hwang notes, they are notable because unlike most cities where scholars have studied gentrification, such as Chicago, Seattle was (and continues to be) “a predominantly White city with relatively low segregation levels.”

In more recent decades, Seattle, like many cities, has grown and become more diverse. Between 1980 and 2013, its population grew from just under 500,000 people to almost 625,000 people, the share of non‐Hispanic Whites declined from 78 to 67 percent, and the share of non-Hispanic Blacks fell from 9 to 7 percent. In contrast, the Asian population’s share doubled to 14 percent, while the Hispanic share more than doubled to 6 percent (Figure 1). 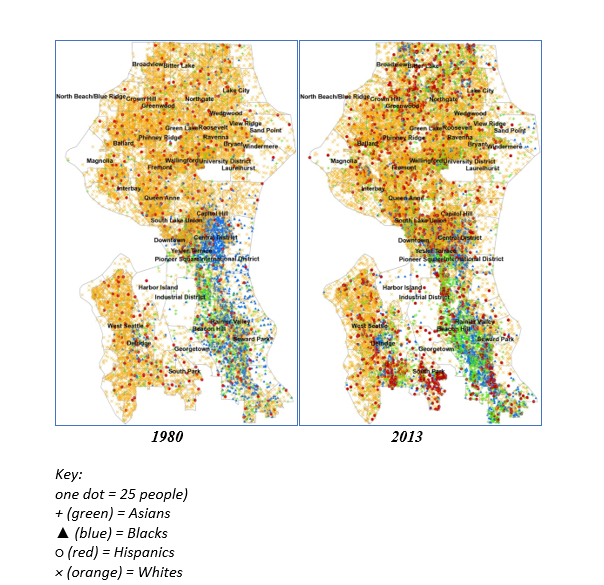 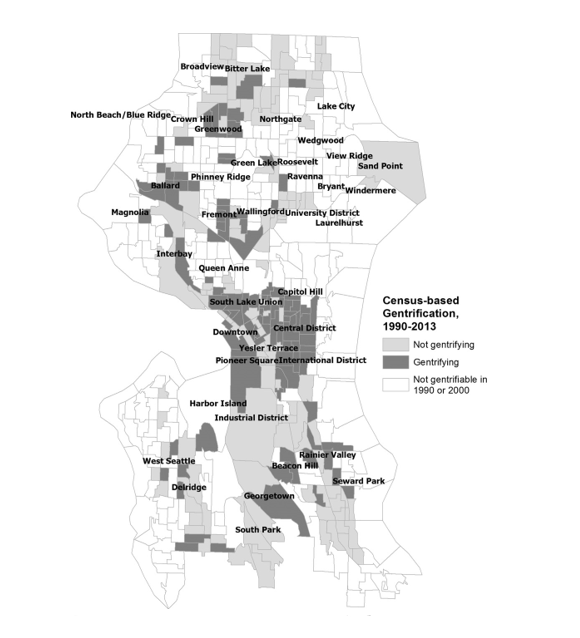 While these patterns might be different from those found in highly segregated cities, Hwang notes they are likely similar to those found in other gentrifying cities that historically had low levels of segregation but now are becoming more racially and ethnically diverse, such as Portland, Oregon or Portland, Maine. Assuming the patterns hold, she contends the findings underscore the need for “targeted interventions to stem processes of neighborhood change exacerbating disadvantage” for Black residents. She notes that these interventions might include subsidies and legal protections from price increases and evictions, inclusionary zoning requirements, inclusive and equitable development processes, and policies and programs that address racial wealth disparities. Such approaches are needed, she concludes, because while “the transformation of cities provides an opportunity to end the persistence of segregation within cities and mitigate the detrimental consequences that come with it… without strong policy interventions, racial inequities may only worsen.”