The typical sale price of an existing single-family home in 2017 was 4.2 times greater than the median household income, according to our latest State of the Nation’s Housing report. That’s a significant increase from 2011, when the price-to-income ratio was 3.3, and 1988, when it was 3.2.

The report also notes that price-to-income ratios vary considerably across the country. As our interactive map shows, the median sale price in 2017 was more than eight times greater than incomes in 12 metropolitan areas, all of them in the West (Figure 1). Price-to-income ratios topped 10.0 in both the Santa Cruz and San Jose metro areas and neared 10 in Los Angeles. On the other hand, ratios were well below 3.0 in much of the Midwest and Northeast, including Youngstown, Syracuse, Toledo, and Pittsburgh.

Figure 2: The Median Sale Price in 2017 is More than Four Times the Median Household Income 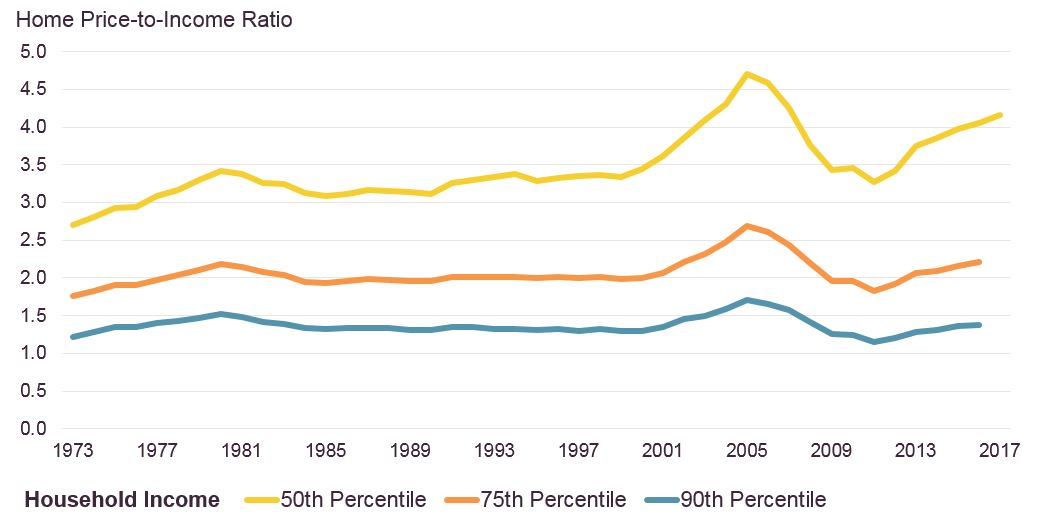 The generally higher ratios today (as compared to 30 years ago) are the result of rapid growth in home prices, relatively stagnant incomes, and historically low interest rates which, by lowering the cost of obtaining a mortgage, have allowed buyers to bid up prices. Moreover, because incomes have risen faster for more affluent people, income growth at the high end has more closely tracked changing home prices, especially in places where inventories have been constrained and competition for housing has been fierce. In fact, according to our tabulations of income data from the Current Population Survey, the price-to-income ratio for households at the 90th percentile of income was 1.4 in 2016, almost exactly on par with the 1.4 average since 1980 and only slightly less than the peak of 1.7 in 2005.

The rise in home prices relative to incomes has fueled growing concerns about housing affordability, especially for low- and moderate-income households in markets where the ratios are high and rising. Moreover, the long, secular decline in interest rates that has kept monthly mortgage costs relatively affordable appears to be ending. Consequently, future price increases could lead more directly to increases in mortgage payments.