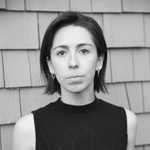 Hannah Hoyt, a Master in Architecture candidate at Harvard Graduate School of Design, was a 2019 Gramlich Fellow in Community in Economic Development. 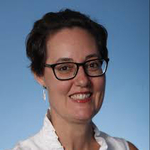 Jenny Schuetz is a fellow at the Metropolitan Policy Program at Brookings. She is an expert in urban economics and housing policy, focusing particularly on housing affordability. Jenny has written...

This piece is the third in a four-part series on innovations in design and construction co-published with The Brookings Institution. It summarizes findings from a report written by Hannah Hoyt, published by Harvard’s Joint Center for Housing Studies and NeighborWorks America.

Laying the literal groundwork for apartment buildings is expensive—and often unpredictable. Clearing the site and preparing the ground can reveal previously unknown obstacles that must be dealt with before construction begins. On average, site preparation and substructure work amounts to 5% to 15% of hard costs, but these are often difficult to estimate accurately in advance.

“You can’t control costs until you get out of the ground,” one contractor told us.

In this article, we explore strategies to improve the efficiency of constructing apartment buildings through cost savings in site preparation, substructure work, and parking. This is the third piece in a series on how innovations in design and construction can reduce costs of multifamily housing. Prior articles discussed cost categories for different building typologies and proposed strategies to save money on land and soft costs.

A key question we address in this piece is whether and how zoning reforms that reduce minimum parking requirements could lower the cost of building apartments.

Site prep is the stage of development in which land is readied for new construction. Infill sites—where many affordable housing units are built—often have some preexisting use that must be demolished or otherwise cleared. Even redeveloping surface parking lots means scraping up the concrete or asphalt.

In some cases, the previous use may have contaminated the soil, requiring remediation. Steeply sloped or uneven land parcels may have to be leveled. While infill sites typically don’t require new installation of water and sewer infrastructure (a major cost for greenfield development), developers may have to install drainage and “right-size” utility hookups to accommodate large apartment buildings.

After the site has been cleared and prepared, the next stage involves excavation to construct the building’s foundation. Foundations are designed to respond to a range of site- and building-specific criteria, and can be broadly classified as shallow or deep. For example, a low-rise building on soil with a high bearing capacity (the capacity of the soil to support the loads applied to the ground) would use a less costly, shallow foundation. A high-rise building—which has higher, more concentrated loads—would require more significant excavation to support a deep foundation (such as one that transfers loads via steel or concrete piles, which are column-type elements). Generally, shallow foundations cost less than deep foundations because they require significantly less excavation. 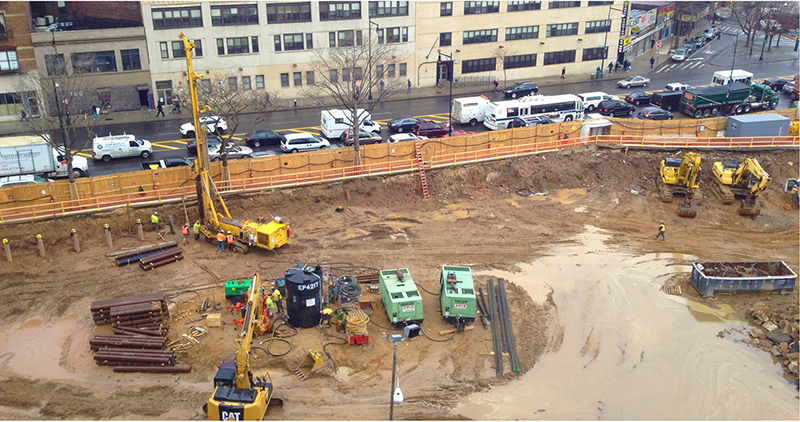 While developers and contractors agree that controlling costs is difficult until a project is “out of the ground,” there are three strategies that could help. First, conduct due diligence on the site in advance, and run site prep concurrently with other tasks when possible. Second, prioritize building forms that permit simple, shallow foundations. Third, local governments should update zoning regulations to reduce parking requirements, thereby reducing the amount of costly structured parking.

Time is money in real estate development, so speeding up the development process can result in cost savings. Typically, a developer will complete site prep work before moving on to the next stages of the project. But in some cases, it may be possible to conduct site prep concurrently with a public RFP process, off-site construction, or above-grade building design. In instances when land is purchased from a local government (as is commonly the case for affordable housing projects), the city itself could lead initial site remediation or preparation efforts during an RFP process. If developers are pursuing some off-site construction, such as modular or flat-pack construction of units, this work could occur in parallel.

While the foundation type is generally nonnegotiable given these conditions, a site selection process that includes significant early-stage geotechnical work can help estimate costs of substructural work accurately. When possible, project teams working on low- and mid-rise housing can prioritize simple building forms and floor plans that enable regular (i.e., rectangular), shallow foundations. Because shallow foundations require less excavation, they are typically less costly and can be completed more quickly than deep foundations.

High-rise buildings and even many mid-rise buildings—especially in dense, urban areas—require deep foundations. Additionally, buildings with underground parking will require more extensive excavation and foundations. In these cases, it is especially helpful to spend more on upfront geotechnical work that gathers as much information as possible about site constraints, including the locations of underground utilities, transportation systems, and the conditions of nearby buildings’ foundations. This due diligence is critical to designing foundations as efficiently as possible, given site constraints.

Building structured parking—spaces in an above- or below-ground garage, rather than surface parking—is expensive. A single unit of structured parking adds an average of $50,000 in per-unit costs, but costs can be higher in some metro areas. Costs increase significantly when parking is underground or requires multiple levels of structure.

Most local zoning laws stipulate a minimum number of off-street parking spaces that must accompany new housing. Revising these policies to reduce or eliminate parking requirements could substantially reduce the development cost of multifamily buildings, especially in locations that are well-served by public transportation. In locations where most households rely on cars for daily transportation, people may be unwilling to rent apartments in buildings that do not offer dedicated parking. Below, we consider some scenarios where reducing parking may be feasible, and examine what the cost savings could be.

Figure 2: Zoning laws don’t have to require the Cadillac of parking types

The per-space cost of parking varies considerably. One level of surface parking is the cheapest option, but is unlikely to be feasible in dense, urban sites. Multiple levels of underground parking is the most expensive option, with several hybrid models in between. If local governments are strategic about reducing parking requirements, they could allow developers to achieve cost savings by using lower-cost categories (e.g., a single ground floor of parking, wrapped in retail or other ground floor uses, rather than two stories of exposed structured parking).

A good example of how reduced parking requirements can save money is Boston’s MetroMark development. MetroMark is a mixed-use, mixed-income, 283-unit housing development adjacent to a rail stop in the Jamaica Plain neighborhood, developed by the Brennan Group and the John M. Corcoran Company and designed by Utile. The project was permitted through the city of Boston’s Large Project Review process, which allows the local community to weigh in on project design, including parking.

With local support for transit-oriented development, the project secured a parking ratio of 0.6 spaces per dwelling unit, a significant decrease from the typical 1.5 parking ratio for similar buildings in the area. With this lower ratio, the project team was able to keep all parking at grade, avoiding costlier multilevel or underground parking. Mindful of the site’s prominent urban location, the design team reduced the visibility of the parking spaces by wrapping them in ground floor, small footprint retail spaces and residential units (Author interview with Matthew Littell, Nick Buehrens, Ian Kenney, June 12, 2019. Utile Design, “MetroMark Apartments”). 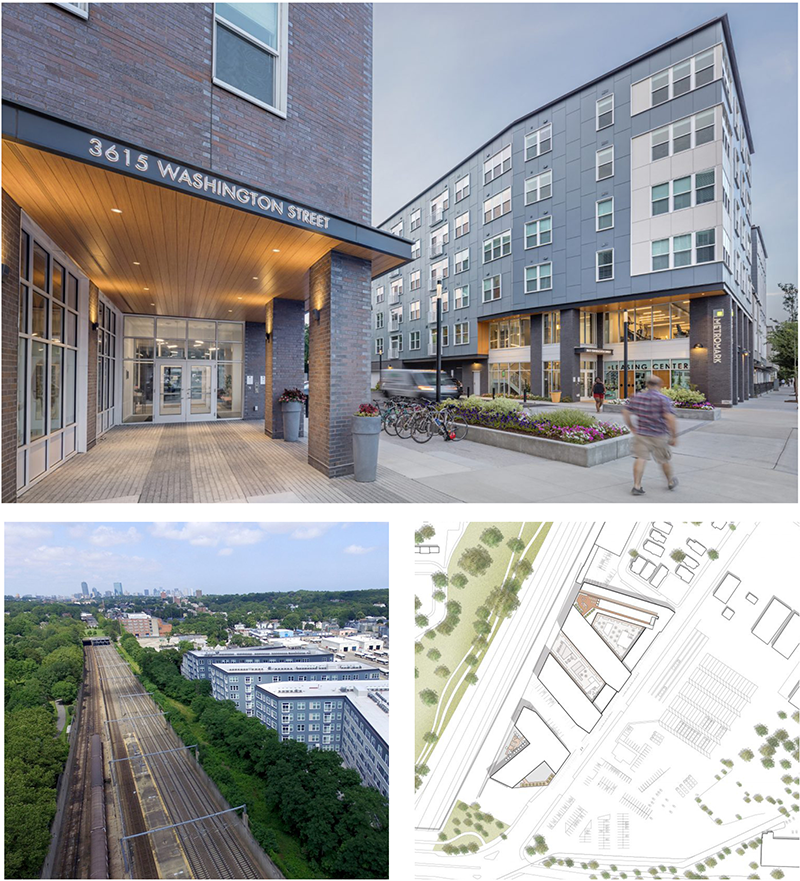 Note: Entrance and courtyard at MetroMark in Boston. Aerial view of MetroMark’s location next to train line and site plan.

Source: All images credited to Utile.

In some locations, consumers may demand parking—even if zoning doesn’t require it

Sites in core urban areas with reliable public transportation are obvious targets for reducing or waiving parking requirements. There is at least anecdotal evidence that parking is often oversupplied in dense, urban areas because of zoning requirements. In a survey of multifamily housing in metro area Boston, only 74% of multifamily residential parking spots were used.

But in many parts of the country, developers build on-site parking because that’s what potential consumers demand. Nationally, more than 85% of U.S. commuters drive to work, a percentage that is remarkably persistent over time. Even in large cities, most households have to drive relatively long distances to reach shopping, restaurants, and other amenities.