New Strains on Home Utilities During the Pandemic

As people spend more time at home during the quarantines and shutdowns related to the COVID-19 pandemic, electricity use has partially shifted from the commercial and industrial sectors to the residential sector. Recent data show that overall electricity use is down, but residential electricity use is up, putting the onus on households to pay for a larger share of the electricity mix than usual. Complicating matters is the fact that electricity demand and cost is highest in the summer months, and that this summer is already shaping up to be hotter than average. This combination will likely present an additional strain for households already grappling with the economic fallout of the pandemic.

Though little data on household-level electricity use during the past few months are available, there are sector-level data about recent trends. The Energy Information Administration (EIA) estimates that weekday electricity use in the central US was 9–13 percent below expected levels in March and April after controlling for temperature. Similar declines were reported for New York City, where weekday electricity demand decreased by 16 percent below expected levels in April. However, these declines mask the increases in residential electricity consumption. The EIA reports that national residential electricity sales were 6 percent higher in April than the same month for the previous five years, whereas commercial and industrial electricity sales were 10 percent and 9 percent lower, respectively. A 2018 study confirmed that more time at home was associated with greater residential energy use but lower overall energy use, and also found that Americans have been gradually spending more time at home in the past two decades.

The recent shift to spending more time at home has been rapid, however, and may result in substantial increases in electricity bills, which could prove problematic for low-income households and those who lost income as a result of the pandemic. In 2018, homeowner households earning less than $25,000 spent a median of 9.3 percent of their income on electricity, while renter households in that income category spent a median of 8.4 percent, according to the most recent American Community Survey (ACS) data. Among these low-income homeowners, the median monthly electricity payment was $120, and among low-income renters paying electricity separately from rent, the median monthly payment was $100 in 2018 (these monthly payment data are normalized across the year).

These payments and shares could look very different today, especially because there are widespread pandemic-related shutdowns and the country is in the height of summer, which adds to the need for at-home air-conditioning and electricity use. According to the EIA, 87 percent of households use air-conditioning, and the costs of this cooling account for 17 percent of total household electricity expenditures. EIA data also reveal that summer months have the highest levels of electricity consumption; in 2019, electricity demand in both July and August was nearly 20 percent higher than the monthly average for the year. This high demand also typically results in higher prices, and EIA data confirm that average retail prices for electricity were highest in July and August in the past two years. For those with air-conditioning, more time at home during what is expected to be a hotter-than-average summer could add substantially to electricity costs. Many vulnerable households do not have air-conditioning, though, including 19 percent of households earning less than $20,000, and the typical local government approaches to provide cooling spaces have been complicated by the pandemic. Recent research has also found that low-income areas in cities experience hotter surface temperatures than higher-income areas, which compounds this issue.

Some renters could be protected from the surge in utility use if their electricity costs are included in their rent, but less than 10 percent of renters fell into this category in 2018, according to ACS data. Adding to the complications of heat and air-conditioning use is the fact that southeastern states have the highest rates of renters paying for electricity separately from rent (Figure 1). Renters in these states are therefore most likely to bear the brunt of higher electricity costs when dealing with the region’s hot summer weather.

Figure 1: Almost All Renters Pay for Electricity Separately from Rent 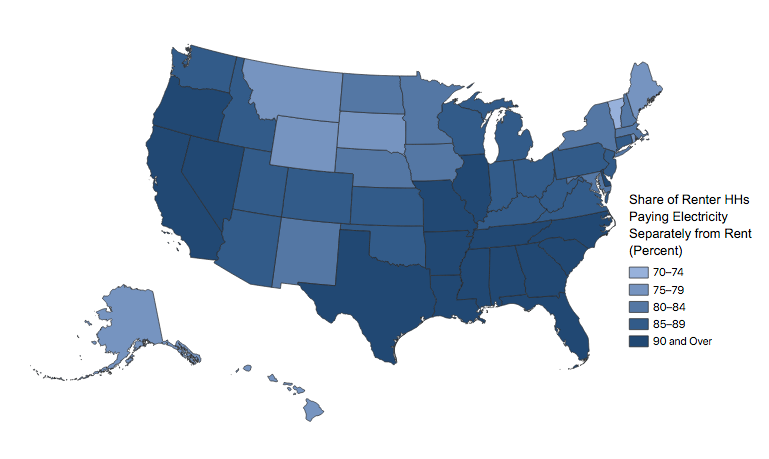 All of these factors pose a challenge for vulnerable households. After paying for housing and utilities, households earning less than $25,000 typically have only $700 left over each month to pay for food, healthcare, and all other necessities according to 2018 ACS data, which leaves little room for additional utility costs. Low-income households were among those most likely to have lost income from the pandemic, as were renter households, minority households, and households without a college education, according to recent Census Household Pulse Survey data. For any of these households, even normal summer utility bills might be a challenge to pay, which is why many states have instituted temporary bans on utility shut-offs and mandated changes in payment plans and late fees from utility companies.

Typically, many utility costs are borne by workplaces, schools, shops, and restaurants, and while the shift of burden from these sectors to the residential sector has not been a one-for-one change, households are now bearing more than their usual share of costs. Many lack the capacity to handle this increase, especially with the other financial ramifications of the COVID-19 pandemic, and the widespread lack of sufficient cash savings. As heat waves begin to grip parts of the US, and COVID-19 cases surge in many states, the need for at-home air-conditioning and the pressure on electric bills and household finances will likely only intensify.