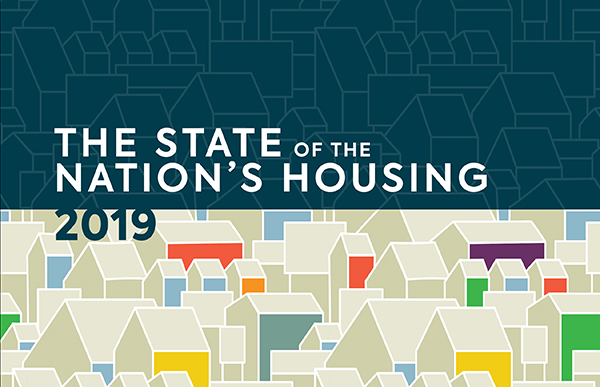 With the nation’s economy on sound footing and incomes on the rise, the number of people forming households in the United States has finally returned to a more normal pace. Housing production, however, has not. Our new State of the Nation’s Housing report documents how the housing shortfall is keeping pressure on house prices and rents, eroding affordability for modest-income households in many markets. The State of the Nation’s Housing 2019 will be released in a live webcast from the Federal Reserve Bank of Atlanta today at 12:00 pm Eastern.

The new report finds that household growth is now back from post-recession lows, but new home construction remains depressed, with additions to supply barely keeping pace with the number of new households. Several factors may be contributing to the slow construction recovery, including excess supply following the housing boom, which took years to absorb, and persistent labor shortages.

The most significant factors, however, are rising land prices and regulatory constraints on development. [Interactive Map] These constraints, largely imposed at the local level, raise costs and limit the number of homes that can be built in places where demand is highest. Meanwhile, a large percentage of new housing being built is intended primarily for the higher end of the market. The limited supply of smaller, more affordable homes in the face of rising demand suggests that the rising land costs and the difficult development environment make it unprofitable to build for the middle market.

The report also finds that the number of homeowners rose sharply, even as the ratio of median home price to median household income rose from a low of 3.3 in 2011 to 4.1 in 2018, a sign of deteriorating affordability. But conditions for would-be buyers vary widely across the country, with home values more than five times greater than incomes in roughly one in seven metro areas (primarily on the West Coast) compared with less than three times in about one in three metros (primarily in the Midwest and South). [Interactive Map]

On the renter side, the number of renter households fell for the second consecutive year in 2018, a stark contrast to the increases of the 12 preceding years. Nevertheless, rents are rising at twice the rate of overall inflation.

The growing presence of higher-income renters has helped keep rental markets stable. This has maintained demand for new apartments, even as overall rental demand has waned. At the lower end of the market, though, the number of units renting for under $800 fell by one million in 2017, bringing the total loss from 2011–2017 to four million. [Interactive Map]

Even as the market continues to lose lower-cost rental units, the share of US households paying more than 30 percent of their income for housing declined for the seventh straight year in 2017. [Interactive Map] Much of the progress was among homeowners, though, whose cost-burden rate declined to its lowest level this century. Cost-burden rates for modest-income renter households, however, continue to rise and with burdens affecting households higher up the income scale, the issue of rental affordability is increasingly getting attention at the state and local level.

Looking forward, the report anticipates that millennials and baby boomers will continue to push household growth, spurring demand in the remodeling market and the demand for entry-level homes. Rental growth is expected to be solid as well, with 400,000 additional renter households per year expected between 2018 and 2028. Whether these projections come to pass depends on a number of factors, including economic conditions, housing affordability, and the pace of foreign immigration.

One big question mark is whether the market can supply housing that is within reach of most household incomes.

To ensure that the market can produce homes that meet the diverse needs of the growing US population, the public, private, and nonprofit sectors must address constraints on the development process. And for the millions of families and individuals who struggle to find housing that fits their budget, public efforts will be necessary to close the gap between what they can afford and the cost of producing decent housing.